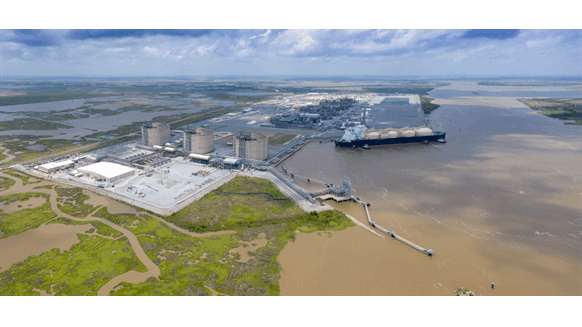 Cameron LNG loads the first commissioning cargo from Train 1 of the export project in Hackberry, La., on May 28, 2019. PHOTO SOURCE: Sempra Energy

The MOU reflects a preliminary deal by in which Mitsui would participate in the Cameron LNG Phase 2 project in Louisiana and a future expansion of the Energia Costa Azul (ECA) LNG project in Baja California, according to a written statement issued by Sempra.

“This agreement signals continued momentum in the growing U.S. LNG export market, while reinforcing the unique competitive advantage that Sempra offers customers seeking LNG export capabilities from the Gulf Coast, as well as the West Coast of North America,” Sempra LNG President Justin Bird stated. “We are pleased to expand our relationship with Mitsui and advance the development of both LNG projects.”

Noting the MOU is non-binding, Sempra stated the agreement assumes:

Phase 1 of ECA – under development by Sempra’s IEnova subsidiary – includes one liquefaction train with an export capacity of 2.4 mtpa, Sempra noted. Also, the firm stated Train 1 of the Cameron LNG Phase 1 project began commercial operations this past August. It added that trains 2 and 3 should start producing LNG in the first quarter and second quarter, respectively, of 2020.

As Rigzone reported in Nov. 2018, Cameron LNG Phase 1 will be capable of exporting 12 mtpa of LNG across three trains.

The proposed Cameron LNG Phase 2, which has won necessary permits from the Federal Energy Regulatory Commission, would add up to two liquefaction trains – 9.97 mtpa of extra LNG production capacity – and up to two LNG storage tanks at the Louisiana facility, which Mitsui partly owns.

Sempra noted that it entered into a heads of agreement with Mitsui last November, adding the firms are working to negotiate and finalize a definitive 20-year LNG sales and purchase agreement for the potential purchase of 0.8 mtpa from ECA LNG Phase 1.

“We are pleased to further expand our strategic relationship with Sempra in a broader range of opportunities,” Motoyasu Nozaki, managing officer and chief operating officer of Mitsui’s Energy Business Unit II, said of the MOU announced Tuesday. “This agreement will contribute to expanding Mitsui’s uniquely diversified supply portfolio worldwide by utilizing the strengths and capabilities of both companies.”