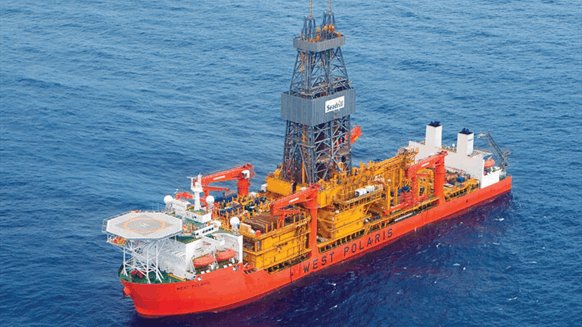 The contract is now expected to end in early November 2020.

Seadrill Partners LLC has recently received a termination notice for its West Polaris drillship contract. As a result, the contract is now expected to end in early November 2020 and backlog is expected to slip by about $23 million.

According to the company’s website, the West Polaris was built in 2008 and is a 6th generation ultra-deepwater drillship with operational history offshore Brazil and Africa. Based on its Q4 fleet status report, the vessel was operating in Southern Asia under a contract that was originally to run from March 2020 to February 2021. The client and dayrate amount were not disclosed.

In late March, the besieged Seadrill—which emerged from bankruptcy in 2018--re-hired adviser Houlihan Lokey Inc. to revisit talks with lenders, according to reports from Bloomberg.  The drilling operator intended to negotiate with creditors after struggling in the aftermath of historically low oil prices and flailing industry activity.

In a release detailing its 4Q 2019 results, Anton Dibowitz, Chief Executive Officer, said, “Our first bank maturities do not fall due until Q2 2022, however we took the initiative to engage in a dialogue with our banks at an early stage to address capital structure challenges relative to current trading conditions.”

The company’s shares have plummeted more than 40% since early March. As of mid-day trading on May 15, shares were trading at $0.46 each on the NYSE, a steep decline from its 52-week high price of $7.67.