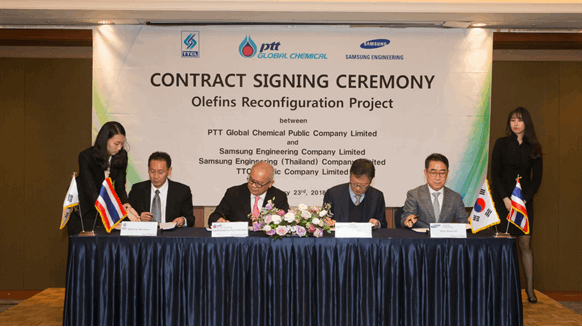 “We have successfully delivered numerous … projects to Thailand for more than 20 years,” Sungan Choi, Samsung Engineering’s president, said in a written statement. “The award …is not only a result of our project execution capabilities and proven track record in Thailand, but furthermore shows the trust PTTGC has in us to deliver projects efficiently.”

Samsung Engineering stated that it will execute the EPCC contract on a lump-sum turnkey basis. The $820 million ORP plant will produce 500,000 tons per annum of ethylene through the major naphtha cracker unit and produce 250,000 tons per annum of propylene. Samsung noted that work on the plant should conclude by the end of 2020.

PTTGC has stated that it is developing ORG, located in Map Ta Phut in Thailand’s Rayong province, to spur other downstream investments in the country’s Eastern Economic Corridor.