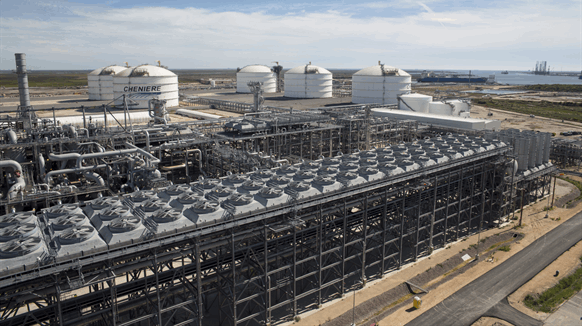 S&P Global stated that feedgas deliveries to Cheniere Energy's Sabine Pass surged, with deliveries hitting a new record of 5.18 Bcf/d on October 18. That was about 43 percent of all US feedgas demand on Oct. 18.

Meanwhile, the three-train, 2.3 Bcf/d capacity Freeport LNG was progressing toward resumption of service in November.

It has been offline since a June 8 explosion and fire. On October 18, an unladen taker, Prism Brilliance, was anchored in the Gulf of Mexico near the inlet to Freeport LNG. As of the previously mentioned date, Freeport LNG had not yet requested permission to resume service. Small feedgas deliveries to the terminal were observed on Tuesday.

Another LNG facility currently offline – the Cove Point Liquefaction facility in Maryland, which was shut down around October 1 for scheduled maintenance – also remained offline.

The turnaround at the one-train, 800 MMcf/d-capacity facility, which was supposed to include a comprehensive inspection, was expected to last about four weeks, according to operator Berkshire Hathaway. That means that the restart should be expected around November 1.

Also, while market participants were floating cargoes in hopes of landing better netbacks in winter months, freight economics and tight ship and regas slot availability was making that difficult. Even so, dozens of tankers, many from the US, were in the Atlantic seeking to land in Europe, as the continent prepared for peak demand season.

According to the Platts Gulf Coast Marker for US FOB, cargoes loading 30-60 days forward was assessed at $18.25/MMBtu on October 18, up 30 cents/MMBtu since the beginning of the week. GCM was assessed at a record high above $70/MMBtu in late August.