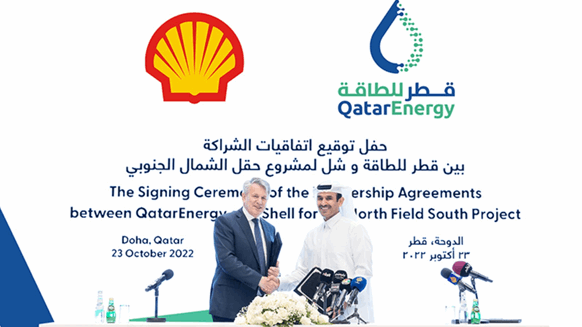 QatarEnergy has chosen Shell as its second international partner in the North Field South expansion project.

North Field South comprises 2 LNG mega trains that will have a combined capacity of 16 million tons per annum (mtpa) and will raise Qatar’s total LNG production capacity to 126 mtpa.

The partnership agreement was signed today by the Minister of State for Energy Affairs, President, and CEO of QatarEnergy Saad Sherida Al-Kaabi and the CEO of Shell Ben van Beurden during a ceremony at QatarEnergy’s headquarters in Doha attended by senior executives from both companies.

In his remarks during the ceremony, Al-Kaabi reaffirmed Qatar Energy’s determination to continue dedicating efforts to power lives with cleaner energy in every corner of the world for greater growth and a better tomorrow for all.

“The new LNG volumes, which Qatar will bring to the market, come at a time when natural gas assumes greater importance considering recent geopolitical turmoil, and amidst the dire need for cleaner energy to meet global environmental objectives. These volumes are a welcome addition given the increasing global concern not just over energy security, but also over a pragmatic energy transition as well as fair and equitable access to cleaner energy,” he said.

Al-Kaabi welcomed Shell to the NFS expansion project and thanked the working teams at QatarEnergy and Shell for their excellent cooperation that led to this agreement. He also thanked van Beurden, who is retiring at the end of the year, for his “distinguished role in advancing our partnership to an unprecedented level and for a relationship that will extend for decades.”

The QatarEnergy President and CEO also congratulated Wael Sawan, who was present at the ceremony, for his appointment as the incoming Shell chief executive officer and wished him all the success.

“I would like to thank the Qatargas leadership and project teams for their efforts in implementing the North Field expansion projects on schedule, and with an outstanding safety record,” Al-Kaabi concluded.

The North Field Expansion Project, comprising North Field South and the North Field East expansion projects, is the industry’s largest-ever LNG project. It will start production in 2026 and will add more than 48 mtpa to the world’s LNG supplies by 2027.

QatarEnergy stated that this was the second announcement for the North Field South partnerships. A third partnership will be announced in due course. The first partner chosen was TotalEnergies. The French oil major was also awarded 9.375 percent like Shell.