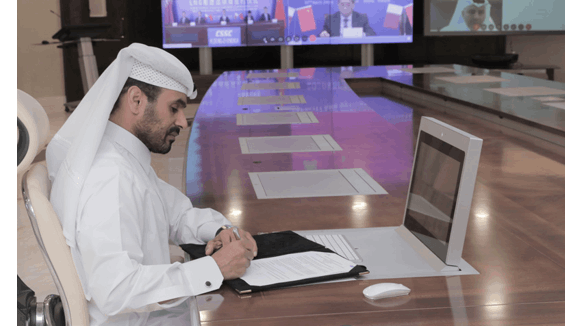 Qatar Petroleum (QP) reported Wednesday that it has entered into an agreement to reserve liquified natural gas (LNG) ship construction capacity in China.

QP, which made the deal with Hudong-Zhonghua Shipbuilding Group Co., Ltd., noted that it reserved the shipbuilding capacity for its future LNG carrier fleet requirements – including those tied to its ongoing North Field expansion projects. The agreement covers “a significant portion” of Hudong’s LNG ship construction capacity for QP through 2027, the Qatari state-owned firm added.

Hudong, which forged the deal with QP in a virtual signing ceremony, is a wholly owned subsidiary of China State Shipbuilding Corp. Ltd. (CSSC).

“Today, we have taken yet another concrete step to reinforce Qatar’s commitment to its global reputation as a safe and reliable LNG producer at all times and under all circumstances,” Sherida Al-Kaabi, Qatar’s minister of state for energy affairs and QP’s president and CEO, remarked in a written statement. “By entering into this agreement to reserve a major portion of Hudong’s LNG ship construction capacity through the year 2027, we are confident that we are on the right track to ensuring that our future LNG fleet requirements will be met in due time to support our increasing LNG production capacity.”

QP stated that its North Field expansion projects will raise Qatar’s LNG production capacity from 77 million tons per annum (mtpa) to 126 mtpa. The firm added that its LNG carrier fleet program – the largest such program in the LNG industry’s history – represents a major role in meeting the shipping requirements for QP’s local and international projects and will replace some of Qatar’s existing LNG fleet.

“The 174,000-cubic-meter LNG carrier for Qatar Petroleum is the latest generation of LNG carrier design customized by CSSC for Qatar,” stated CSSC Chairman Lei Fanpei. “The carrier has the world’s leading performance for efficiency, reliability and environmental conservation, demonstrating CSSC Group’s great efforts and commitment to the success of Qatar Petroleum’s projects.”

Al-Kaabi noted the landmark deal’s value could “be well in excess of 11 billion Qatari Riyals” (approximately US$3 billion). He added the agreement’s value hinges on QP’s needs and the extent of China’s LNG shipbuilding capacity expansion.