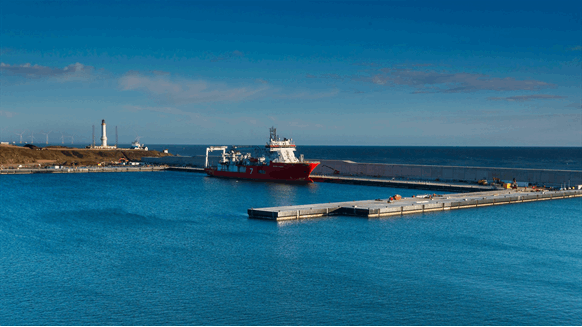 More than 60 percent of Port of Aberdeen’s $452 million South Harbor development is now operational, marking the penultimate construction milestone in this transformational project.

The handover from construction to operations for Dunnottar, Crathes, and Castlegate East Quays was completed this week.

Castlegate West is scheduled to open in December 2022 and the remaining Balmoral Quay will be brought into service in the second quarter of 2023 making Aberdeen the largest berthage port in Scotland.

More than 25 vessels have berthed at Aberdeen South Harbor during a ‘soft start’ to operations which began in July. A host of new and existing customers have already benefitted from Aberdeen’s safe and efficient port services and generous quayside space.

The Port’s existing North Harbor offers world-class facilities and infrastructure, and the South Harbor expansion will add 1.4km of deepwater berthage, accommodate ships up to 300 meters in length, incorporate extensive heavy-lift zones up to 15 tons per square meter, and offer 125,000 square meters of flexible laydown space and expansive project areas.

South Harbour is the largest marine infrastructure project underway in the UK and an asset of national strategic significance, included in the Scottish Government and UK Government’s NPF3 planning framework and Scotland’s draft NPF4.

The expanded Port of Aberdeen is at the heart of the North East Scotland Green Freeport bid which could create up to 32,000 high-quality jobs, boost GVA by £8.5 billion and transform the region into the ‘Net Zero Capital of Europe’.

“I’m delighted with the continued progress of our port expansion. This is an exciting time at South Harbor as it has now moved from being largely a construction project to an operational harbor. We look forward to welcoming new and existing customers to the port, while we complete the safe and efficient construction of the project.”

“South Harbor will be at the heart of the development and expansion of high-potential sectors, including offshore wind, green hydrogen, and decommissioning. When we reach the full potential of our expanded Port, it will bolster the regional and national economies by $2.7 billion GVA and support 17,500 jobs both local to the port and further afield,” Bob Sanguinetti, Chief Executive of Port of Aberdeen, said.