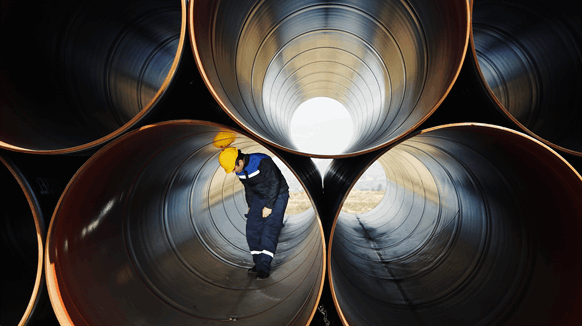 Imported steel trade actions under review by the Trump Administration could limit U.S. job growth from pipeline projects, the Association of Oil Pipe Lines (AOPL) has warned. The trade group issued the admonition after the U.S. Department of Commerce on Friday released a report on its probe of steel imports under Section 232 of the Trade Expansion Act of 1962.

“After President Trump has done so much to reinvigorate the economy and provide Americans tax relief we would hate to see American workers lose jobs from steel trade actions that delay or cancel pipeline construction projects,” AOPL President and CEO Andy Black stated in response to Commerce’s report.

The federal agency, whose investigation also examined aluminum imports, found that the quantities and circumstances of imported steel mill products and wrought and unwrought aluminum imports “threaten to impair the national security.” Commerce Secretary Wilbur Ross is recommending that Trump consider the following alternative actions to correct the “problem” of steel imports:

The Commerce Department reasons that each of the proposed remedies would boost U.S. steel production from its present 73 percent of capacity to an approximately 80 percent operating rate, which it contends is the minimum rate needed for the steel industry’s long-term viability. Moreover, the agency stated the proposed tariffs and quotas would be in addition to any existing duties.

According to AOPL, the report and recommendations cover steel products – including seamless or welded pipe and tube products – in addition to raw steel imports. Moreover, the organization noted that a 2017 study it commissioned along with other industry groups finds that trade or purchasing restrictions that hike line pipe costs would:

In its response to release of the Commerce Department report, AOPL also argued that:

AOPL also contends that a reduced number of new pipeline projects resulting from any trade action “would run counter to the Trump administration’s goal of expanding U.S. energy production and infrastructure to support the economy, job growth, and national security.”

Another trade group with an interest in any trade action on steel imports, the Interstate Natural Gas Association of America (INGAA), told Rigzone Friday that was still reviewing details of the Commerce Department report. Moreover, it pointed out that the “Commerce 232” proposals are just recommendations – not a final action – concerning a broad trade and national security issue. In addition, INGAA echoed AOPL’s contention that specialized line pipe represents a small amount of all the steel used domestically.

“INGAA would be concerned that any broad government action that affects the availability of this very specialized product could have the unintended result of delaying or even reducing the number of new pipeline projects,” said INGAA spokesperson Cathy Landry. “This would be unfortunate, particularly given that ICF, a consulting group, estimates that about three-quarters of current pipeline construction expenditures – including material purchases – end up in the pockets of American workers and business owners regardless of the origin of the line pipe.”

“These tariffs would undoubtedly raise costs for U.S. businesses that rely heavily on steel and aluminum for the majority of their products – and ultimately consumers,” Gerard said in an API press release. “This recommendation is inconsistent with the Administration’s efforts to bolster the U.S. economy, support U.S. businesses, and strengthen U.S. infrastructure.”

The Commerce Department stated that the President must make a decision on the steel recommendations by April 11, 2018, and can take a range of actions – or no actions – based on the report. Actions could include modifying proposed remedies, including adjusting percentages.