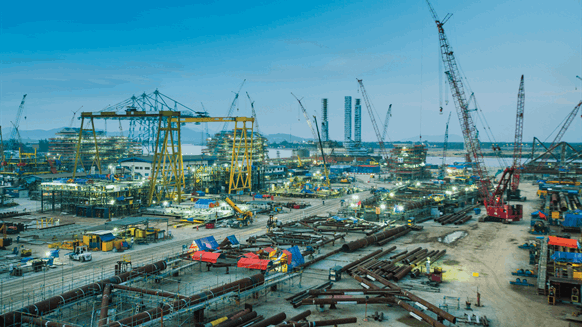 Petronas has denied media reports that it could be buying a significant stake in cash-strapped oil and gas services firm Sapura Energy.

Malaysian state-owned energy company Petronas has denied media reports that it could be buying a significant stake in cash-strapped oil and gas services firm Sapura Energy.

In a statement from late last week, Petronas referred to news reports, comments in the media, and recent speculation on purported ‘talks with the Government on a proposal to take a significant stake’ in Sapura Energy.

Petronas said that it categorically denies these reports and speculations and that it ‘had always been and will continue to be strictly guided by an established framework for any investment or divestment consideration’.

The announcement further emphasized that Petronas would remain committed to working closely together with the OGSE players, leveraging on their expertise and capability as activities increase with the industry recovering from the impact of Covid-19.

Sapura Energy recently stated that it had been having cash flow and liquidity issues exacerbated by the Covid-19 pandemic.

The company said that it was taking action to resolve these liquidity issues, including expediting claims and commercial settlements with clients, discussing with vendors, and negotiating with lenders for support through existing working capital facilities.

One step in that direction was the naming of Cosimo Borrelli, a restructuring and insolvency practitioner in Asia, to its board of directors.

It is worth noting that Sapura Energy saw its net loss in the fourth quarter widen to a staggering $1.6 billion, compared to a loss of $50.9 million a year prior. Most of this was due to impairment on goodwill worth $780 million and impairment on property, plant, and equipment worth $520 million.

This reaction by Petronas could be traced back to a statement made by Former Malaysian prime minister Najib Razak. Namely, he pleaded with the current government to protect Sapura from bankruptcy, and his suggestion was for Petronas to buy the oilfield services firm.

“This was how Petronas saved MISC in 1998. Upon recovery, Petronas can resell part of Sapura’s shares to the local market just as Petronas resold MISC’s shares to make a profit,” Najib said.

“If Sapura goes bankrupt, 10.6 million Amanah Saham Bumiputera investors will suffer direct losses of $950 million. […] 10,000 high-paying jobs will be lost and around 4,500 vendors or suppliers will be affected.

“Sapura used to be the second-largest oil and gas sector services company in the world with a value of $7.1 billion. Currently, this company, which is still a service company to the country’s largest petroleum sector, is only worth between $120 and $155 million,” he added.

He also proposed solutions like providing government loans to Sapura or for the contractor to be taken over by Khazanah Nasional – the Malaysian government’s sovereign wealth fund.