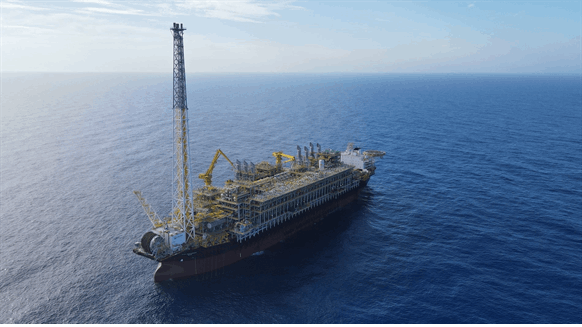 Petrobras has informed that the FPSO Guanabara installed in the Mero field in the Santos Basin pre-salt reached its maximum production capacity.

Brazilian state-owned oil and gas major Petrobras has informed that the FPSO Guanabara installed in the Mero field in the Santos Basin pre-salt reached its maximum production capacity.

Petrobras said that the FPSO Guanabara hit the mark of 180,000 bpd, about eight months after the unit started operating.

The FPSO Guanabara achieved this result with four producing wells and three gas injectors. It is the first platform in a series of four definitive units scheduled for Mero, each capable of producing up to 180,000 bpd of oil.

According to the company, this performance is the result of the high productivity per well, the acceleration of the learning curve, and the use of state-of-the-art technologies in the field - such as the so-called loop configuration for the water and gas injection wells and the separation of CO2 by membranes.

“The result shows a ramp-up of production at a consistent pace, indicating the field's high productivity and a sound development strategy, within the strictest operational safety standards," said Petrobras' Chief Exploration and Production Officer Fernando Borges.

The FPSO Guanabara incorporates one of the most robust CCUS programs, since the Mero field has a 45 percent content of this gas, enabling the reduction of CO2 emissions.

Furthermore, Petrobras is developing, for application in the field, the subsea separation technology called HISEP – High-Pressure Separation. With it, it will be possible to separate the CO2-rich gas produced for reinjection into the reservoir on the seabed.

The Mero field holds not only the FPSO Guanabara but also the FPSO Pioneiro de Libra, which operates the Early Production System, currently producing 50,000 bpd. The FPSO Pioneiro de Libra Early Production System is dedicated to the evaluation of the field's production behavior. With the two units in operation, the Mero field currently produces about 230,000 bpd.

In the second half of this year, Petrobras plans to install the second definitive platform in Mero – the FPSO Sepetiba, also capable of producing up to 180,000 bpd. By 2025, the company will put another two units into operation in the field, totaling five systems that together will correspond to 770,000 bpd of the installed capacity in the country.

Mero is Brazil's third largest field by volume of oil in place, behind only Tupi and Búzios, also located in the Santos Basin pre-salt.

The operation of the unitized Mero field is conducted by the Consortium operated by Petrobras, in partnership with Shell, TotalEnergies, CNODC Brasil, CNOOC, and Pré-Sal Petróleo as the Brazilian Government's representative in the non-contracted area.