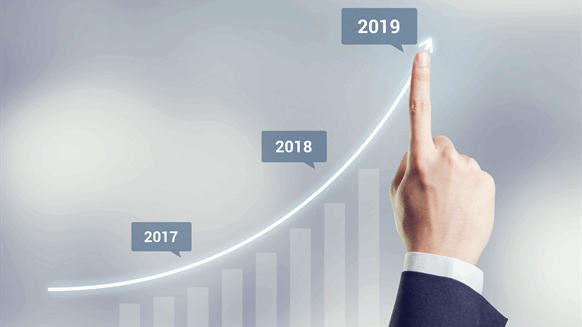 The Permian's oil pipeline network is expected to grow 60-70 percent in the next five years.

The Permian Basin is the energy-producing juggernaut behind the U.S. shale revolution. This vast oil and gas play stretches over 75,000 square miles from West Texas into southeastern New Mexico. The Permian can be split into two sub-basins, the Delaware in the west and the Midland to the east.

Over the past century, the Permian has produced approximately 35 billion barrels of oil and 80 Tcf of natural gas. The play’s multiple shale formations are stacked on top of each other like a layer cake. This allows vertical wells to be drilled through many shale zones all at once and then drilled horizontally through even more liquids-rich areas. In short, the Permian is a petroleum geologist’s dream working environment.

Today, the Permian is easily the largest U.S. oil field and stands second globally after the legendary Ghawar field in Saudi Arabia. It accounts for over a third of all U.S. crude oil production. EIA puts Permian output in March at more than 4 million b/d, or 33% more than the play was producing this time last year.

Baker Hughes reports that the Permian now holds 55% of all U.S. crude-directed rigs. The Permian is unique in that it also yields huge amounts of natural gas, which comes along as a “free” byproduct of oil extraction (i.e., “associated gas”). Despite now producing 13.2 Bcf/d of gas (15% of the U.S. total), the Permian has not had a single gas rig since last August.

With more efficiency reducing costs, Permian breakeven oil prices have plummeted to below the $40 per barrel mark, a threshold that the market has consistently been well above since April 2016. As reported in EIA’s February 2019 Drilling Productivity Report, the constraints on pipelines have not lowered new Permian output in the absolute sense like many analysts thought that they would. More costly rails and trucks have helped compensate for the bottlenecks.

Besides the obvious need for more oil pipelines, new gas takeaway capacity is also critical to cut flaring that has been pushing up against legal limits and shutting-in oil production. Additionally, producers desperately seek more pipelines because the glut has discounted the price that they can get for their crude.

The good news is that pipeline help continues to arrive in West Texas. The resource potential is just too massive for anything else. And more takeaway will keep the Permian as a baseload supply source for the burgeoning U.S. oil and gas export business: piped gas to Mexico and LNG and crude oil to all corners of the globe.

The Permian’s oil pipeline network is expected to grow 60-70 percent in the next five years. This would support an additional 2 million b/d or more of new crude production. In November, for instance, Plains All American Pipeline expanded the capacity of its 350,000 bpd Sunrise Pipeline. Plains also expects the 670,000 bpd Cactus 2 line from the Permian to Corpus Christi, Texas, to start partial service in the third quarter of 2019, part of the play’s next round of outbound capacity expansions coming online.

For gas, the Permian could see an additional 7-9 Bcf/d of new pipelines in the next few years. For example, Kinder Morgan's 2 Bcf/d Gulf Coast Express expansion will come online in October. Feeding cheap Permian gas to mushrooming LNG export terminals along the Gulf is crucial to giving the U.S. a competitive edge to compete globally with Russian piped gas into Europe and Qatari LNG to Asia.

Future Permian oil and gas supply seems unlimited. In December, USGS reported the “largest continuous oil and gas resource potential ever assessed” in the Permian’s Wolfcamp-Bone Spring (in the Delaware sub-basin), appraising some 281 Tcf of gas, 46.3 billion barrels of oil, and 20 billion barrels of natural gas liquids. EIA’s Annual Energy Outlook 2019 forecasts that oil and gas will still account for well over half of U.S. energy demand in 2050, so the need to develop this resource stands firm.