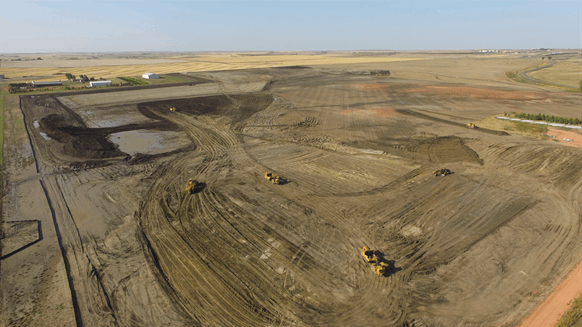 An aerial view of the Belfield, N.D. site where Meridian Energy is building its Davis Refinery.

Meridian Energy Group, Inc., which is building a greenfield refinery in North Dakota to process Bakken crude, reported recently that it will build a similar facility in the Permian Basin.

As Rigzone has reported, Meridian’s 49,500-barrel per day (bpd) Davis Refinery in Belfield, N.D., will qualify as a “Synthetic Minor Source” from an emissions perspective. Bearing that designation reflects the regional refinery’s measures to:

On Feb. 11 of this year, Meridian announced that it had struck a deal with a unit of Winkler Co. to build a 60,000-bpd full-conversion refinery in Winkler County, Texas, in the Permian’s Delaware Basin.

The Permian refinery will be similar to the North Dakota facility and will also be permitted as a Synthetic Minor Source, Meridian added. The company asserts that the Davis Refinery, which it expects to begin commercial operations in 2021, will be the first full-conversion refinery to be designated in that manner.

In a recent conversation with Rigzone, Meridian CEO William Prentice offered additional insights on the North Dakota and Texas projects. Read on for his perspective.

Rigzone: What are some of the key similarities you see between the Bakken and Permian projects, and what lessons can you apply from the Bakken to the Permian?

William Prentice: The Meridian strategy focuses on full-conversion crude refineries that utilize local crude oil to serve local markets and which can be permitted for air quality purposes as a Synthetic Minor Source under state law (as opposed to falling into the Major Source category and requiring federal permits). That strategy, including process and emissions control designs, was developed into the Davis Refinery and will be applied to the Permian plant with differences that will primarily be associated with the different characteristics of the crude we will be using.

We are still in the very preliminary stages of design on the Permian plant but at this point believe that the throughput capacity of Permian will be just under 60,000 bpd. The site can accommodate up to three additional units of the same size if market conditions warrant.

Rigzone: What are some significant differences between the projects?

Prentice: The two areas of divergence are the crude being used and the regulatory requirements in the two states. The throughput at the Davis Refinery in North Dakota is limited because an additional permit would be required to increase capacity to greater than 50,000 bpd so Meridian will wait until it has been in operation for a substantial period of time before making that determination. There is no such limitation for the Permian project, so the design criteria will be to size the project to meet the air quality limitations of a Synthetic Minor Source. That, and the characteristics of the Permian crude we will use, will determine the material differences between the two facilities.

Note that the Davis Refinery was the first full-conversion refinery ever permitted as a Synthetic Minor Source for air quality purposes and will be the cleanest refinery on the planet when its is completed. We are going to see if we can do an even better job on emissions for the Permian facility.

Kaushik  |  March 15, 2019
Sirs, It is quite interesting n ambitious project for both the refineries. In particular I am most impressed by the green oil refining technology to curb emissions of carbon monoxide, nitros oxides and sulfur oxides. Sir, I have been trying to promote a in-house technology with some additional before the stack n contained the pollutants. This same technology can be used even for power plants , wherein high sulfur coal can be used still complying with the EPA norms. More detailing n proper design needs to be done to make it suitable n effective. We have been the suggested technology in the Naphtha n Gas Cracker plants for years.
David Brown  |  March 13, 2019
SIrs, I have spent many years running topping plants and the most difficult obstacle we had to overcome was upgrading the naptha to standard octanes. You start with about 67 octane and must get to 87. I found alternate customers for as much as possible. How do you plan to improve the octane of your naptha? I find the thought of starting up a new unit very interesting and loads of fun!! Enjoy!!