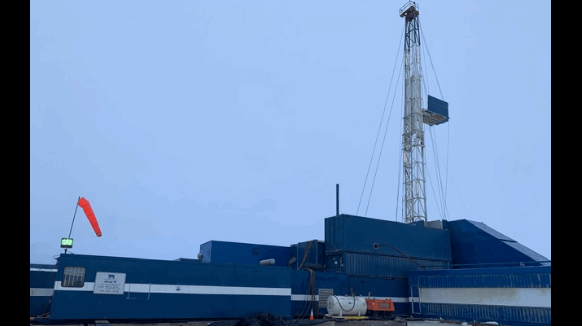 The Talitha prospect could be the latest in a series of key North Slope oil discoveries. (Photo: The Alkaid well in Alaska)

London-based Pantheon Resources PLC has made a discovery of potentially 1.8 billion barrels in Alaska’s North Slope region, based on online reports. The deposit is along the Dalton Highway and Trans-Alaska Pipeline System corridor, according to The Alaska Journal of Commerce.

The discovery was made after the company made an updated evaluation of an old exploration well and used information collected from recent nearby drilling, the Journal reported; management added that the Talitha prospect could be the latest in a series of significant North Slope oil discoveries within the past five years, as it has the potential to produce 500 million barrels of oil with peak production approaching 90,000 bpd.

On the Alaska North Slope, Pantheon holds a 90% to 100% working interest in all its projects. In March 2019 Pantheon announced its Alkaid well to be a discovery in the Brookian zone of interest, following successful testing that exceeded expectations.

In East Texas, Pantheon holds a 55.1% to 75% working interest in four prospects in Tyler and Polk Counties, which hold the Eagle Ford, Austin Chalk, Navarro and Wilcox formations.

Pantheon uses strategic drilling and farm-outs to prove up existing assets. Given its working interest positions in both East Texas and Alaska, it has the capacity to use farm outs to fund or subsidize future operations, and to work with strategic partners, according to the company.

Currently, Pantheon is engaged in a farmout process for its Alaskan assets. A physical data room has been established in Houston to allow future partners to perform due diligence ahead of a potential investment into the project.