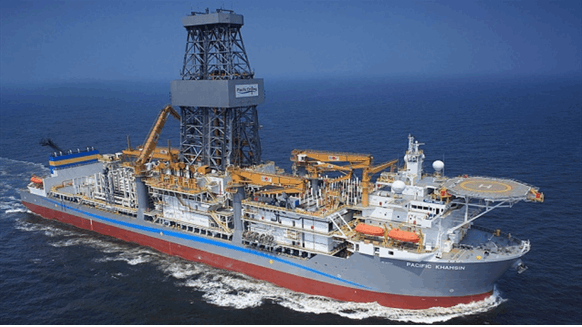 Pacific Drilling on Tuesday released its updated fleet status report, which includes a bit of work in the U.S. Gulf of Mexico. PHOTO SOURCE: Pacific Drilling

Pacific Drilling on Tuesday released its updated fleet status report, which includes a bit of work in the U.S. Gulf of Mexico (GOM).

Total S.A. has subcontracted Pacific Drilling’s ultra deepwater (UDW) drillship, the Pacific Khamsin, from Equinor for one well in the Gulf of Mexico. Drilling of the well is expected to begin March 2020 and run through July 2020, according to the fleet report, and will be at a dayrate of $252,000, which includes a base of $185,000 plus $67,000 for managed pressure drilling (MPD) and other integrated services.

Equinor ASA has extended its contract with the Pacific Khamsin for two remaining option wells at escalating dayrates. The dayrate for the first well is $227,000 (base $175,000 plus $52,000 for MPD and other integrated servcies). The contract begins November 2019 and the first well is expcted to be concluded in Feb. 2020.

Chevron Corporation’s contract for the ultra deepwater (UDW) drillship, Pacific Sharav, in the GOM has been extended to January 2020 for one additional firm well set to start in September 2019. It also includes three additional option wells with dayrates escalating above the first well's rate of $175,000.