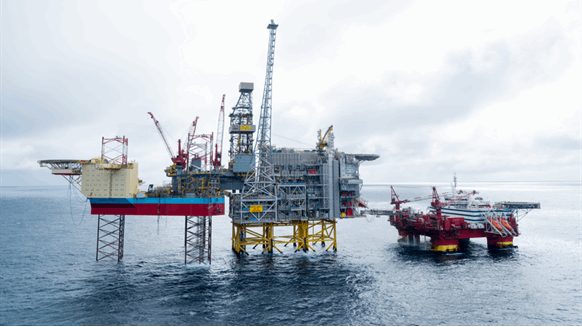 “This is a big day for everyone working on the Martin Linge project, for Equinor and for our partner Petoro,” Arne Sigve Nylund, executive vice president of Equinor’s Projects, Drilling & Procurements unit, remarked in a written statement emailed to Rigzone. “I would like to thank everyone who has worked hard to deliver this project.”

Operator Equinor owns a 70% stake in Martin Linge, with Petoro holding the remaining 30%.

Equinor pointed out the North Sea project is noteworthy because its use of power from shore enables it to emit low levels of carbon dioxide. The company observed the offshore field – located 26 miles (42 kilometers) west of Oseberg, Norway in 377 feet (115 meters) of water – is operated from an onshore control room. It also stated the field’s expected recoverable reserves are approximately 260 million barrels of oil equivalent (boe), producing roughly 115,000 boe per day at plateau in 2022.

The jacket-based integrated wellhead, production, and accommodation platform for Martin Linge receives power by way of the world’s longest alternating current sea cable, which extends 101 miles (163 kilometers) from an onshore substation in Kollsnes, Norway, Equinor noted. The firm added the platform was linked to shore power in December 2018, with the permanently anchored oil storage vessel on the Martin Linge field getting connected soon thereafter.

“Electrification is one of our main measures for reducing CO2 emissions from our activities,” explained Rune Nedregaard, Equinor’s senior exploration and production vice president for operations south.

Equinor stated the Martin Linge platform is the first such facility on the Norwegian Continental Shelf to be put onstream from shore. The company noted the production wells and processing plant are operated from a control room in Stavanger, with offshore operators using tablets in the field to interact with their onshore colleagues.

The adjacent storage vessel will process Martin Linge’s oil production, with shuttle tankers bringing the oil to market, pointed out Equinor. The company added that a new pipeline will carry the field’s gas production to the existing St. Fergus, Scotland-bound pipeline.

“Martin Linge is an important contribution to Norwegian oil and gas production,” commented Nedregaard. “Thanks to new infrastructure in this area it will be possible to realize new discoveries in the future. Equinor has formed a cross-disciplinary team who is looking into the opportunities of a wider area surrounding Martin Linge.”

“It has been a very demanding job, and more challenging than expected, but we have reached the finish line together with our suppliers and our partner Petoro,” concluded Nylund. “Martin Linge will now produce and create jobs and value for society for many years ahead.”