Wall Street forecasts of spikes and dives will follow as usual, but the market appears in no mood for a substantial bearish or bullish turn.

The direction of the oil price in the last 12 months can be described as peculiar but predictable. After a relatively mundane first half of 2018, trading in the second half saw bouts of extreme bearish and bullish excitement.

Balance of probability, based on squaring off supply and demand scenarios, suggested that Brent, the global proxy benchmark, and West Texas Intermediate (WTI), the leading U.S. benchmark, would fluctuate in a $60-70 per barrel range.

It was a range-bound environment most, including big oil majors, could live with. Except, of course money managers, for whom range-bound fluctuation and stable climes don’t make money. So as the October cut-off date for U.S. President Donald Trump’s unilateral re-imposition of sanctions on Iran drew nearer, speculators went into overdrive via long calls, dragging Brent to three-year intraday highs of above $84. Wild Wall Street predictions of imminent $100 oil prices followed.

If only the price prophets had bothered to look at physical data, especially tanker movements out of Iran, which suggested predicted declines were nowhere levels perceived. And Trump being Trump, allowed U.S. allies and partners reliant on Iranian oil imports time and leeway, despite saying he wouldn’t.

The end result? From highs of above $84 Brent came tumbling down below $53. As usual, the much needed correction was also accompanied by extreme calls bordering on the dramatic. There is such a thing as an overcorrection; and while a decline was merited–three declines of over 7 percent in a mere ten trading sessions to November 23 absent of a crisis, were anything but (see Fig 1). 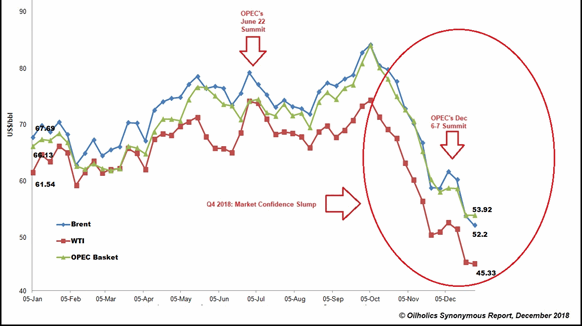 As trading volumes pick up in 2019, it is that dramatic decline of the fourth quarter of 2018 that is being corrected, with a set of variables not too dissimilar from last year, and the added worry of an economic slowdown in key crude demand spheres, if not the entire global economy.

Despite the perennial obsession with supply-side permutations on Wall Street, the oil market is a story of both supply and demand. Depending on whose demand growth forecasts you rely on, from the International Energy Agency (IEA) to oil cartel Organization of Petroleum Exporting Countries (OPEC), you are likely to encounter a projection range of 1.1 to 1.4 million barrels per day (MMbpd), with the cartel’s being the most optimistic.

For reference, the total global consumption rate was pegged just above 99 MMbpd in 2018. Of the big five crude importers–i.e. China, U.S., India, Japan and South Korea–only Indian demand is on a definitive up. Meanwhile, that of Japan, which relinquished its third-largest global crude importer’s spot to India recently, is visibly down despite an uptick in construction activity in the run up to the 2020 Tokyo Olympics.

With nearly a fifth of global oil cargoes heading to China, a cooling of its economy to single-digit growth ought to be a worry. Germany is also flirting with a recession, while doubts persist on the impact of Brexit and the U.S. economy.

Even in a best case scenario, oil demand is unlikely to fire up beyond 1.4 MMbpd, but the conservative 1.1 MMbpd (or lower) scenario could well materialize, as weaker demand prospects become apparent in the second half of the year following a tight first quarter or two.

That brings us to supply scenarios where 2019 finds the United States to be the world’s leading oil producer (see Fig. 2), having capped Saudi and Russian production in September. It has given OPEC a massive headache.

As of September 2018, US Is The World's Largest Oil Producer 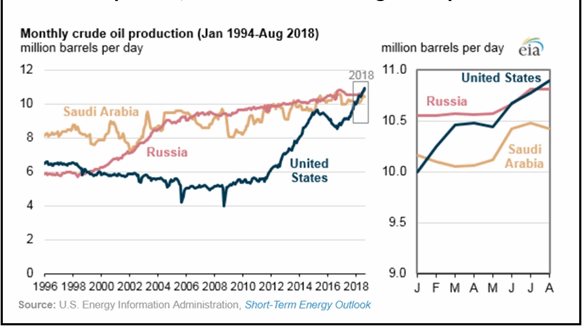 As incremental American cargoes step into the breach of light sweet crude markets, U.S. producers have acquired the status of buffer producers, even if Saudi Arabia is, and will remain, the world’s only swing producer in a classic sense.

The situation–largely premised on shale decline rates of 5 to 7 years–is unlikely to materially alter over the short-term, neutering OPEC’s ability to control oil prices in a sentiment-driven market, even if all crudes are not created equal; and that demand for some OPEC members’ heavy sour crude remains strong.

Nazri Mansor  |  February 02, 2019
We will see some stability of prices in the 1st half of 2019 aided by colder weather which boost heating demand but by 2nd half of 2019 I can see prices declining due to weaker demand.