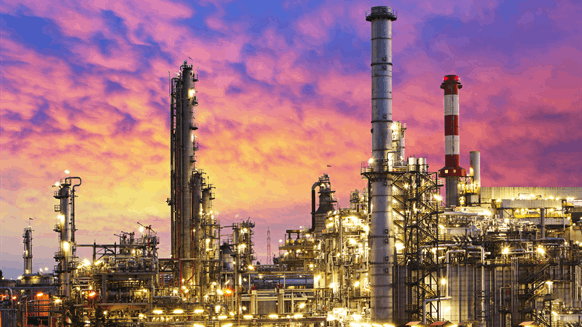 An oil trader's collapse is fueling concern over the financial stability of a sector that accounts for about a quarter of China's crude processing capacity.

(Bloomberg) -- The collapse of an oil trader linked to one of China’s independent refiners is ratcheting up concern over the financial stability of a sector that accounts for about a quarter of the nation’s crude processing capacity.

Hontop Energy, which purchases oil on behalf of private refiner Shandong Tianhong Chemical Co., went into receivership in February, according to documents filed with Singapore’s accounting regulator. Its demise brings focus onto the financial health of many of China’s private refiners, known as teapots, which have built up massive debt loads to modernize infrastructure and procure crude on a global scale.

Hontop’s fall is reverberating across the world of oil trading as many Western merchants and oil companies like Trafigura Group and BP Plc have built teams over the last five years that are dedicated to supplying teapots. And as the coronavirus epidemic threatens profit margins and coincides with a broader credit crunch in China, traders and bankers are increasingly wary about their exposure to the refiners.

“Many of the teapots are already on a credit redflag list of banks in Singapore,” Michal Meidan, director of the China Energy Programme at the Oxford Institute for Energy Studies said. “The virus has certainly tightened cash-flows and exacerbated banks’ concerns.”

While traders don’t expect the financial problems of teapots to have much of an impact on China’s overall crude demand, they say it will likely result in widespread delays and isolated cases of distressed cargoes as buyers and sellers reassess relationships. Bloomberg talked with numerous traders and bankers with ties to the sector to see how they think the situation is likely to play out. They asked not to be identified because they’re not authorized to discuss the matter publicly.

Both Hontop and Shandong Tianhong are units of Chinese conglomerate China Wanda Group, which itself has been struggling to juggle its debt load. Repeated attempts to get comment from Hontop and Wanda were unsuccessful.

After these refiners burst into the international oil scene in 2015, armed with newly-issued crude import licenses, it became apparent that their balance sheets, accounting records and collaterals weren’t sufficient to convince global banks to loan the tens of millions of dollars needed to import crude from Africa, Latin America and the Middle East.

To resolve this, a teapot looking to purchase foreign oil would seek out partners, including other refiners, to co-operate and beef up their combined collateral size, allowing smaller firms to obtain credit needed for pricey oil purchases.

That means the collapse of one teapot might prompt banks to seek payments from others in the credit-guarantee arrangement, potentially leading to a domino effect that could implicate other companies in the sector, according to the traders.

While international banks have funded crude purchases by some of the larger teapots, a lack of credit worthiness and the domestic nature of their business mean some rely heavily on local provincial banks to finance their imports. Now oil traders are concerned that those local banks may move quickly to reduce their exposure to the sector after Hontop’s collapse.

Such a move would have a large impact as teapots have few other options for financing. The standard procedure for the purchase of crude requires the teapot to give the seller a letter of credit issued by a bank several days before the shipment is discharged. Failure to do so could prompt the seller to withhold the oil, potentially leaving it with a distressed cargo it has to resell at a lower price.

Not all sellers have required letters of credit. In the rush to win market share among teapots, some oil majors and international trading houses offered open credit, discharging their cargoes at the buyer’s terminal of choice even before receiving a payment.

Open credit is typically provided by sellers to their most trusted and reliable counterparties. Since the financial credibility issues began to arise, at least two companies have since stopped giving open credit terms to teapots as well as other counterparties that regularly deal with these buyers, said traders who spoke on condition of anonymity.

To contact the editors responsible for this story:
Serene Cheong at scheong20@bloomberg.net
Dan Murtaugh, Alexander Kwiatkowski