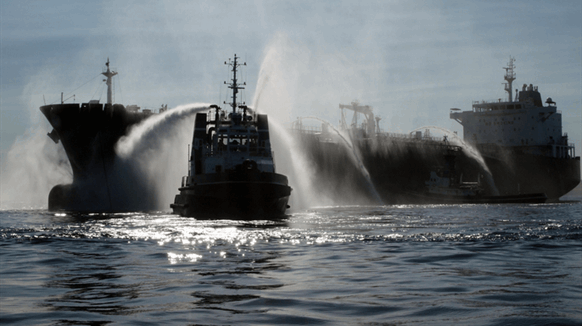 The blaze on the MT New Diamond oil tanker has reignited, the Sri Lanka navy revealed on Monday.

The blaze on the MT New Diamond oil tanker has reignited, the Sri Lanka navy revealed on Monday.

Disaster management teams had been able to douse the fire onboard the tanker and were working to prevent its recurrence using fire smothering agents, according to the navy. However, the tanker eventually reignited due to the effects of extreme temperature and sparks onboard, the navy outlined.

As of Tuesday, ships, aircraft and tugs belong to the Sri Lanka Navy, Sri Lanka Air Force, Indian Navy, Indian Coast Guard and other stakeholders were continuing their disaster management operations to suppress the reignited fire, according to the navy.

“As a result of the incessant effort of the mission partners, the flames have been reduced to a certain extent as of now,” the navy said in a statement posted on its website.

“There is no risk of the fire spreading to the oil storage or leaking oil from the ship into the sea as of now. However, today a research team from the National Aquatic Resources Research and Development Agency, Marine Environment Protection Authority and University of Ruhuna is scheduled to visit the site to inspect water samples, to find out if there is any damage to the marine environment due to this disaster,” the navy added.

“Accordingly, the Sri Lanka Navy, rest of the mission partners and the team of experts continue to engage in this disaster management operation, until the fire is completely controlled,” the navy continued.

The navy highlighted that six salvage operation experts and 11 disaster management professionals directed to the island by the company that acts as the commercial and technical operator of the MT New Diamond had arrived at the sea area where the ship is located to support disaster management operations.

Due to high temperature inside MT New Diamond the fire has re-ignited. Sri Lanka Navy,Air Force together with Indian Navy & Coast Guard and rest of the stakeholders continue to fight the fire in unfavorable weather to reduce the flames.#SL_Navy #SLAF #IN #ICG #MT_New_Diamond #lka

The navy initially announced that a fire had broken out on the Panama-flagged MT New Diamond oil tanker on Thursday.