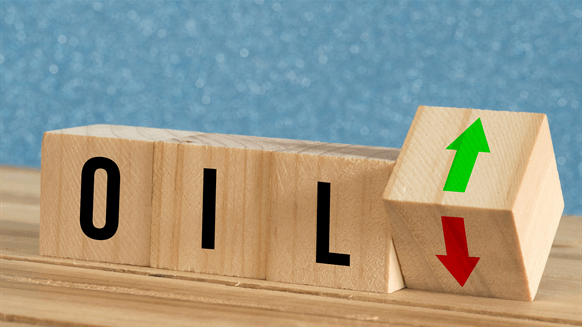 Oil eked out a modest gain on Monday.

(Bloomberg) -- Oil in London eked out a modest gain on Monday as investors weighed whether an unprecedented deal by the world’s biggest producers to cut output could stabilize the market reeling from the coronavirus pandemic.

Futures rose less than 1% after earlier surging 8% following the OPEC+ alliance agreement to slash production by 9.7 million barrels a day starting in May. West Texas Intermediate fell 1.5%, and the May-June timespread moved deeper into contango, indicating that traders see the physical glut worsening even with the output cuts.

The group reached the deal following days of intense negotiations after Mexico declined to endorse the original agreement reached Thursday. While the OPEC+ deal amounts to the largest coordinated cut in history, it’s dwarfed by the estimated 20 million barrels a day or greater decline in oil consumption as a result of the coronavirus pandemic.

The U.S., Brazil and Canada will contribute an additional 3.7 million barrels in nominal production reductions as their output declines, and other Group of 20 nations will cut 1.3 million more. The G-20 numbers don’t represent real voluntary cuts but rather the impact that low prices have already had on output, and they would need months, or perhaps more than a year, to take effect.

“The scale of the demand destruction is just so large, even this historic agreement can’t offset it in the short term,” Daniel Ghali, a TD Securities commodity strategist, said by phone. “Longer term, what it can do is ensure a strong recovery.”

The OPEC+ deal came after days of brokering by U.S. President Donald Trump, who spoke by phone to Mexican President Andres Manuel Lopez Obrador, followed by a three-way conference call with Russian President Vladimir Putin and King Salman of Saudi Arabia. The Saudis are ready to cut oil production further if needed when the OPEC+ alliance meets again in June, Prince Abdulaziz bin Salman, the oil minister, told reporters on a conference call on Monday.

Trump on Monday morning asserted in a tweet that the cut would be closer to 20 million barrels per day, without getting into specifics.

West Texas Intermediate for May delivery fell 35 cents to close at $22.41 a barrel on the New York Mercantile Exchange. May’s discount to June settled at $6.85 a barrel, the biggest it’s been since 2009.

Brent for June delivery gained 26 cents to close at $31.74 a barrel on the ICE Futures Europe exchange.

Saudi Aramco reduced pricing for all its grades to Asia, signaling the state company’s intention to defend sales in its biggest market even while paring output.

Oil prices have been in freefall since the middle of February as some of the world’s biggest economies went into lockdown to try to stop the coronavirus from spreading. Whether the OPEC+ deal will be enough to steady a market where demand losses may amount to 35 million barrels a day and storage space is rapidly running out. Goldman Sachs Group Inc. called the agreement “historic yet insufficient.”

The voluntary reductions by OPEC+ would only lead to an actual production cut of 4.3 million barrels a day from first-quarter levels, assuming full compliance by core-OPEC and 50% by other participants in May, Goldman said in a note. The bank sees demand losses in April and May averaging 19 million barrels a day.

“The scale of production cuts is a move in the right direction, but considering how badly demand is affected, it was never going to be significant enough to push the market closer to balance,” said Edward Bell, senior director for market economics at Emirates NBD PJSC in Dubai.

“Is Russia going to cut production by 2.5 million barrels a day in two weeks? That’s a pretty steep ask.”

--With assistance from Saket Sundria, Dan Murtaugh and Mahmoud Habboush.

To contact the editors responsible for this story:
David Marino at dmarino4@bloomberg.net
Mike Jeffers, Steven Frank