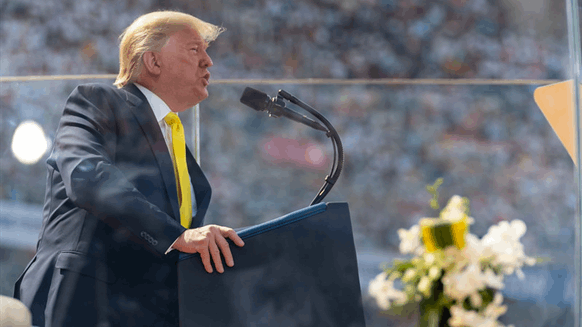 Uncertainty swirled over the volume of curbs and whether reductions would be made at all.

(Bloomberg) -- Oil soared after U.S. President Donald Trump said Saudi Arabia and Russia would make major output cuts, though uncertainty swirled over the volume of curbs and whether reductions would be made at all.

While Trump tweeted that cuts of 10 million to 15 million barrels were possible, he didn’t specify if that reduction would be per day. He also said he spoke to Saudi Crown Prince Mohammed Bin Salman about the market.

His comments immediately triggered skepticism, even within the U.S. government. One person familiar with the administration’s discussions with the Saudis said there was widespread internal confusion about what the president was referring to and the numbers he mentioned may not be reliable.

The prospect of the U.S. joining in on any output cuts was raised after Ryan Sitton of the Texas Railroad Commission, in a rare move for the state’s oil regulator, spoke with Russian Energy Minister Alexander Novak on reducing global supplies by 10 million barrels a day. He said he would also talk to the Saudi oil minister soon.

The Middle East kingdom also didn’t confirm the cuts, but called for an urgent meeting of the OPEC+ producer alliance to reach a “fair deal” that would restore balance in oil markets, state-run Saudi Press Agency reported. Any curbs by the group would be conditional on other countries joining, according to a delegate.

U.S. West Texas Intermediate futures jumped as much as 35%, before closing up almost 25% -- their biggest single-day advance ever. Brent crude increased as much as 47%, the global benchmark’s largest surge in intraday trading.

“The 10, 15 million barrel a day cut is just not going to happen. On top of that, Russia has older oil wells, so they can’t restart in the same way that Saudi Arabia can,” said Tariq Zahir, a fund manager at Tyche Capital Advisors.

If Trump meant 10 million barrels per day, that would equal both Moscow and Riyadh curbing nearly 45% of their production in what would prove an unprecedented move. If collective action does remove that much from the market, that would be the equivalent of about 10% of world demand prior to the impact of coronavirus crisis.

Still, that may not be enough to stop the pain that’s rippled across the energy industry as demand craters with the coronavirus outbreak shutting down economies around the world.

The Trump administration will also rent space in the U.S. emergency oil reserve to domestic producers that are scrambling to find places to store excess barrels. After years of saying OPEC should work to reduce oil prices, Trump has recently changed tack as American shale producers struggle in the wake of crude’s collapse.

The person familiar with the administration’s discussions with Saudi Arabia said U.S. leverage had been undermined by the president’s conflicting messages.

The sudden jerk in prices Thursday also reverberated across the oil futures curve, with the prompt WTI timespread narrowing by almost 58% to trade at negative $1.45 a barrel in the 15-minute period following Trump’s tweets. The six-month spread, or gap between the May and November contracts, also narrowed by as much as $3.78 a barrel.

Mean Joe Green Farmer  |  April 02, 2020
We've all heard comments from the WH on several fronts, recall the China deal; that went on for over a year with nothing. I find it difficult to rely on tweets from the WH. Words are empty if not followed by substantiative actions. Being an old farm boy, I may not be right smart but I'm not plumb dumb either.