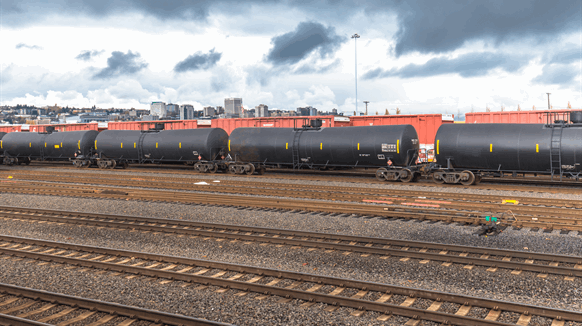 Canada's oil sands producers are offering to commit to shipping a certain amount of their crude by rail in return for the Alberta government raising their production limits.

(Bloomberg) -- Canada’s oil-sands producers are offering to commit to shipping a certain amount of their crude by rail in return for the Alberta government raising their production limits.

When Alberta introduced its curtailment policy last year as a glut weighed on Canadian oil prices, the government was counting on Enbridge Inc.’s expanded Line 3 pipeline coming into service late this year and providing enough space for producers to ship all of their output. That project was delayed amid permitting setbacks in Minnesota, leaving explorers increasingly dependent on shipping crude by rail.

But the curtailment program boosted the price for their crude so much that it wasn’t economical for refiners to take deliveries of it by more-expensive rail. That has caused a large portion of Alberta’s rail-shipping capacity to be shut in. Though they didn’t provide details, the deal explorers outlined at the TD Securities Calgary Energy Conference on Tuesday would allow them to produce at full capacity and send all of their output to refineries even without new pipelines coming into service.

“The problem right now has been that crude-by-rail has been relatively slow to ramp up,” Cenovus Energy Inc. Chief Executive Officer Alex Pourbaix told reporters on the sidelines of the conference. “What we’ve suggested is that government should consider modifications to the curtailment rules that would allow companies to overproduce their monthly commitments as long as they can demonstrate that that product is moving by incremental rail.”

Alberta now has about 260,000 barrels of daily rail shipping capacity that’s sitting idle, Suncor Energy Inc. Chief Executive Officer Mark Little said during a panel discussion at the event, citing industry estimates and Genscape Inc. data. That’s more than the roughly 175,000 barrels of daily volume that has been held back as part of the province’s curtailment program, he said.

“We’re within rounding distance of being able to literally get all of the production to market with the excess rail that’s available and get a fair price for it,” Little said. “That’s actually the objective the companies working together with the government are really focused on.”

Alberta’s government is looking at the proposal to allow higher production in exchange for more crude by rail. The idea is a “possibility, but it’s too early to say,” Energy Minister Sonya Savage told reporters at the conference.

“If we get rail moving to its fullest extent, what an opportunity that is,” she said.

To contact the editors responsible for this story:
Simon Casey at scasey4@bloomberg.net
Christine Buurma, Joe Richter