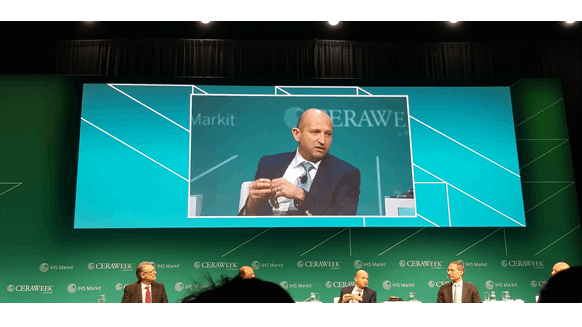 Now seems to be the perfect time for the oil and gas industry to leverage digital capabilities to achieve success in the digital transformation.

The oil and gas industry’s digital transformation is at an inflection point.

“We’ve invested a tremendous amount of resources into the standards, the equipment and collecting the data … today, we’re at the leading edge of data, but we are not at the leading edge of data-based decision-making,” Ahmad Al-Knowaiter, Saudi Aramco’s chief technology officer, said during the CERAWeek by IHS Markit conference in Houston this week.

He said oil and gas has some of the largest data sets in the world, adding that Saudi Aramco generates 3 billion data points per day of surface data alone. Subsurface has similar numbers.

The question becomes how to integrate all the data to make better decisions.

“We have a tremendous amount of data around the health of our equipment … it just tells the operator in the field ‘you’ve got a disaster out there. Turn off the piece of equipment,’” said Al-Knowaiter. “That doesn’t help me as a corporate leader. Data can help make those decisions better. That’s the next level the industry is struggling with today.”

Despite oil and gas companies expressing that automation and digitalization doesn’t mean they’re ready to ditch their existing workforces, employees often fear their jobs may be at risk as more tasks become automated.

“It’s the underlying nature of change, the change management journey that any individual goes through,” Lal Karsanbhai, executive president for Emerson’s Automation Solutions, told Rigzone. “It’s a cycle of fear and uncertainty and 'we’ve done it this way for 50 years. I know this works.’”

He said depending on the degree of digital transformation the industry adopts, a mix of new skillsets will be required.

“It’s going to require a little bit of time. You’re going to have to train the workers to do something new,” Karsanbhai said. “Workers have inherent knowledge and understanding of the process and have been doing it for many years, but can be trained to do something else within this new world.”

Emerson’s Automation Solutions chief technology officer Peter Zornio added that after years of stalled projects due to the industry downturn, the buzz around the upstream sector now involves building projects.

“They are dying to find welders, pipe fitters and electricians,” said Zornio. “There’s a huge gap in skilled trade levels.”

When it comes to successfully executing the digital transformation, Karsanbhai warns against “falling in love with big numbers and opportunities.”

“You hear all of the producers talking about millions of dollars of savings or billions of data points, but how do you monetize that,” he said. “We’re seeing many of these companies struggle with how to monetize the opportunity.”

Karsanbhai’s answer is in the approach.

Dr.SADEK KADDOUR  |  April 22, 2019
the question is: could digitization help us to make decisions? is digital data enough and credible?