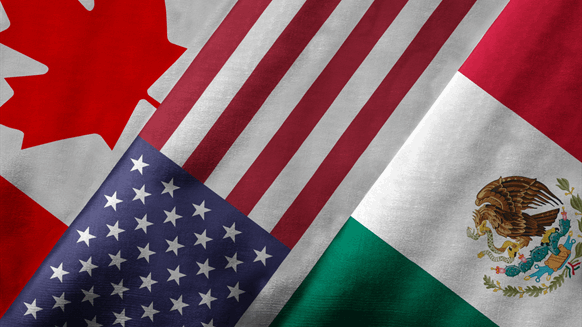 (Bloomberg) -- President Donald Trump disagreed with executives of major oil and gas companies Thursday about the importance of keeping binding dispute settlement procedures in a renegotiated North American Free Trade Agreement, according to a person familiar with the discussion.

Trump told roughly a dozen of the oil and gas industry leaders at a White House meeting that he understood -- but did not share -- their view that those Nafta provisions are essential to give companies confidence to invest in Mexico and Canada, said the person, who asked not to be identified describing the closed-door session.

That position puts the president in league with American Trade Representative Robert Lighthizer, who has signaled he doesn't support continuing to subject the U.S. to the investor-state dispute settlement provisions in Nafta that empower businesses to challenge other countries for discrimination.

The issue has emerged as a major point of friction between the Trump administration and business interests. The Chamber of Commerce, American Petroleum Institute and other groups have argued that the dispute-resolution provisions provide a critical safety net for U.S. companies operating in Canada and Mexico.

"Without that protection, you look at future investments in Mexico very differently and you may decide that because of that added risk you're not willing to make those investments," said Dennis Arriola, an executive vice president of Sempra Energy, which owns natural gas facilities and renewable power assets in Mexico. Arriola did not attend the White House meeting.

A White House representative did not immediately respond to questions about Trump's Nafta comments, but the administration said in a statement that the president "met with members of the American Petroleum Institute to discuss the important role natural resources play in our energy sector."

The petroleum institute said in an emailed statement that members of its executive committee used the meeting to highlight "a host of the industry's priority issues, including the importance of trade policies that recognize the integrated nature of North American and global markets."

The meeting came a week after Trump decided to slap a 25 percent levy on steel imports, and a 10 percent tariff on aluminum. Pipeline companies that rely on special grades and types of steel not made in the U.S. plan to ask the Trump administration for an exception.

But targeted relief for pipeline operators wouldn't directly help oil companies that focus on extracting crude or the companies seeking to liquefy natural gas so it can be shipped on tankers around the world. Analysts say the tariffs will increase the cost of wells, raising the break-even price for extracting oil and gas from dense rock formations nationwide.

Nafta was a focus of the discussion. The oil industry leaders outlined their support for the accord and highlighted the country's extensive energy trade with Canada and Mexico. Mexico accounts for 60 percent of total U.S. natural gas exports and is the largest export destination for U.S. petroleum products.

Some industry leaders have emphasized a virtuous cycle, where investment in Mexico's energy infrastructure helps build demand in the country for U.S. oil and gas.

"If we're not building infrastructure and the future there, somebody else is going to," Arriola said. "And if somebody else does, they're probably going to be selling their services and products and commodities into the market."

--With assistance from Alex Nussbaum Kevin Crowley and David Wethe