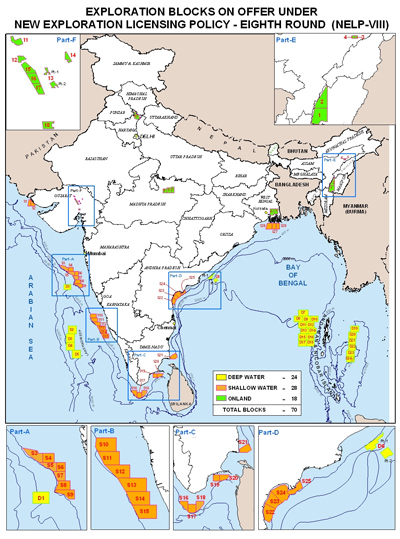 Announced in the spring, NELP VIII is offering 70 Indian blocks for exploration and production, of those 62 are located offshore. After the planned 11 bidding rounds, India hopes that 80% of its sedimentary basins will be under exploration.

Compared to other regions of the world, India's jackup fleet earns similar rates but at increased lengths. While the Middle East employs substantially more jackups, with 88 rigs contracted, the average dayrate is right on par with that of South Asia. Additionally, the two regions boast the longest contracts of any other with average contract lengths spanning more than 1,000 days. With 49 jackups currently contracted, Southeast Asia, on the other hand, commands a 25% higher dayrate with an average of more than $169,000 a day for its jackups. Yet the average contract length for jackups working offshore Southeast Asia is approximately 700 days.

Interestingly, the same number of competitive jackups is working offshore India and West Africa. While West African contract lengths are almost half that of those signed in South Asia, West Africa commands a 51% higher dayrate than jackups working in India.

Of the 44 rigs contracted for work offshore India, 34, or more than 77% of the rigs contracted, are jackups. Seven are drillships, and three are semisubmersible rigs. All of these rigs are currently performing drilling operations.

With 15 rig managers represented in the waters offshore India, Transocean has the most rigs contracted for work in the area with 12 rigs. ONGC manages 10 of its own rigs working in the region, and Aban Offshore has six rigs drilling offshore India.

Indian national oil company ONGC employs the most rigs in the waters offshore India with 36 rigs contracted (including the 10 rigs it manages). Reliance and Gujarat State Petroleum both have contracts on three rigs presently, and Hindustan Oil Exploration Company and BG both have one rig working offshore India.

The rig earning the highest rate of pay offshore India at the moment is Transocean's Deepwater Frontier drillship, which is currently drilling for Reliance Industries through late 2011. Other high earners in the area include Transocean's Deepwater Expedition at $375,000 a day, Essar Oilfields Services' Essar Wildcat semisub at $342,000 a day and Transocean's Discoverer Seven Seas drillship at $316,000 a day. The jackup earning the highest rate of pay in the region is Aban Offshore's Deep Driller 8 at a dayrate of $200,000.

While the average age of the fleet working in the area is 25 years old, presently there are four newly built rigs working offshore India. Additionally, there is one jackup currently being built in India for Great Offshore, an Indian company. 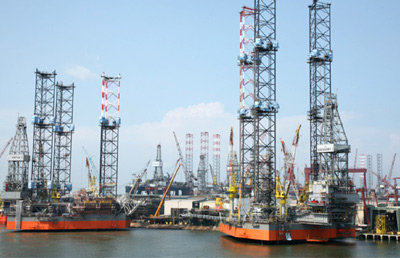 Delivered in September 2008, the Discovery-1 jackup is managed by Discovery Hydrocarbons. Contracted in late 2007, the jackup has been working for ONGC since its delivery at $159,660 a day. The term contract lasts through the latter part of 2011. 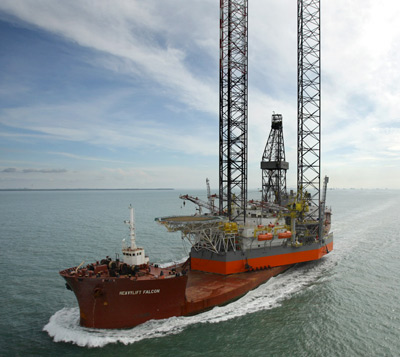 Delivered in February 2009, Aban Offshore's Deep Driller 8 jackup is currently contracted to Hindustan Oil Exploration Co. for a firm two-well contract through September 2009, followed by a two-well option that would carry the contract through the start of 2010. Signed in August 2008, the contract provides for a $200,000 dayrate. 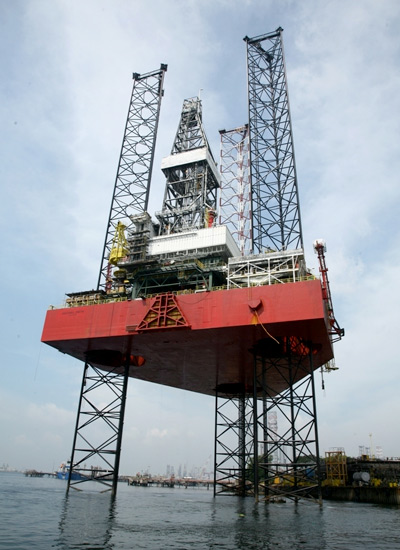 Another newly built rig, the Greatdrill Chetna jackup, managed by Greatship (India) Limited, was completed in March 2009. In a contract signed in December 2008, ONGC is paying $161,000 a day for the rig through 2012.

Additionally, the Samed Shikhar jackup is currently under construction in India for Great Offshore. This is the first time that an offshore drilling rig will be built in the country. While delivery of the rig was expected in the first quarter of 2009, completion of the rig's fabrication has been pushed back to the first quarter of 2010. Due to the delay, ONGC cancelled a five-year contract on the rig that it had previously held, although the NOC will allow Great Offshore to participate in future tenders.

Of the rigs currently working offshore India, a number of them are falling off contract in the near future and have not yet been signed to a new one. The Atwood Beacon jackup will conclude its contract with Gujarat State Petroleum at the end of July. Also, Transocean's Actinia semisub will conclude its contract with ONGC (through a farm-out with Reliance Industries) at the end of July.

Three more rigs, the Noble Ed Holt, Pride Pennsylvania and Kedarnath jackups, will conclude their contracts by the close of 2009, and these rigs have not yet been signed to new agreements. Recently, ONGC issued a tender for three ILC jackups rated for waters measuring 300 feet deep for a firm contract to last five years each. This tender, due to open on Dec. 31, 2009, is against the renewal of these jackups.

Entering the region, Transocean's Dhirubhai Deepwater KG1 drillship with a water rating of 12,000 feet has been farmed out by ONGC from Reliance Industries. Rated for waters measuring up to 12,000 feet deep, the rig is scheduled to arrive in India in July for a four-year farm-out contract.

Looking forward, the average number of rigs contracted in 2010 remains high at 35 rigs. Additionally, there is already an average of 18 rigs contracted for work offshore India in 2011. This is despite the fact that most of the rigs working in the region are jackups, which typically are not contracted very far in advance. Furthermore, the average dayrate for rigs working offshore India in 2010 is approximately $225,000, and that number grows to $302,000 in 2011.

According to RigOutlook, demand for jackups offshore India is expected to stay in the 33 to 36 rig range through the close of 2010. Then, that number is forecasted to increase to 36 to 40 jackups working offshore India through May 2012. Because the Congress Party has been reinstated to Parliament, economic reforms are expected to take place more quickly, including an increased domestic supply from ONGC, which will encourage the NOC to increase its drilling backlog with term contracts.