In a 21-day expedition led by Chevron, DOE's National Energy Technology Lab (NETL), the US Geological Survey, the Minerals Management Service, in addition to a host of other industry experts, the most prospective gas hydrates reservoirs yet found have been located and drilled.

"Gas hydrates for a long time have been the most elusive and confounding of hydrocarbon deposits to find," said Dan McConnell, vice president of AOA Geophysics, one of the companies selected for the site selection committee. "This is the very first time that thick hydrates accumulations have been drilled by design, that those hydrates were where they were predicted to be."

The Gulf of Mexico Gas Hydrates Joint Industry Program (JIP) was formed by US governmental groups and petroleum companies to investigate the occurrence of gas hydrates and develop technologies for reliable detection and safe drilling.

"The goal of the DOE program is to determine the scale at which gas hydrates exist in potentially recoverable reservoirs in the Gulf," said Ray Boswell, the project leader from NETL. "This expedition is a major success in that effort."

"In the pursuit for gas hydrates, which has been put on by Japan, India, Korea and China, it was thought for a while that the US had lagged in its efforts," said McConnell. "But we have in this one expedition found the most promising hydrates that can actually be produced -- the thickest, most saturated hydrates that have yet been encountered. So, it really is a landmark expedition."

"These sites represent a range of gas hydrate occurrences, including not only the prospective gas hydrate saturated sands," said the USGS' Tim Collett. "In addition to their resource implications, they should serve as excellent research sites to advance our understanding of the nature and evolution of gas hydrate systems." 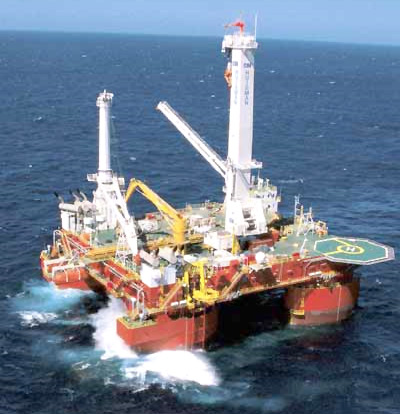 Through April and May 2009, Helix's Q4000 semisub drilled seven deepwater wells in Walker Ridge, Green Canyon and Alaminos Canyon in the US Gulf of Mexico. Ranging in water depths of 4,800 to 6,600 feet, four of the wells encountered concentrations of hydrates in porous, permeable sands; two discovered low concentrations of gas hydrates in sands; and one intersected promising sands yet no hydrates.

The 21-day expedition proved that under the US Gulf of Mexico is a new source of energy. Gas hydrate is an icy combination of water and natural gas, which is thought to be found in abundance in both marine environments and the Arctic, but has been historically difficult to find in commercial quantities. Coming in below the budget of $11.2 million, this US expedition has potentially changed the face of the petroleum industry as it exists now. 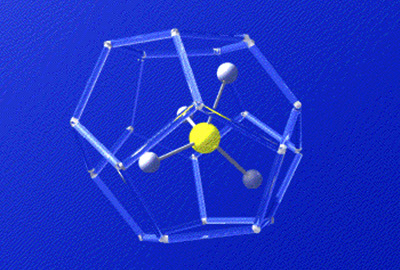 Following a 2005 JIP Leg II program to determine the potential drilling hazards related to gas hydrate in fine-grained sediments, the recent expedition started with determining where to drill. AOA Geophysics was brought into the fold as a part of the site selection committee because of previous published papers outlining how to locate gas hydrates.

"They recognized that we brought a set of skills that was needed in the site selection committee," provided McConnell. "We end up looking at a lot of data, and we are always looking at the interface between gas and gas hydrates as we work for our clients. So when Chevron asked us using their supplied data to prospect for gas hydrates, we had really good ideas of where to look for them and were actually able to guide them toward two of the successful sites."

AOA Geophysics helped to put forth two successful sites, on the Walker Ridge 313 and the Green Canyon 955 locations. In fact, the Walker Ridge site was one that the company had identified in a 2002 paper. 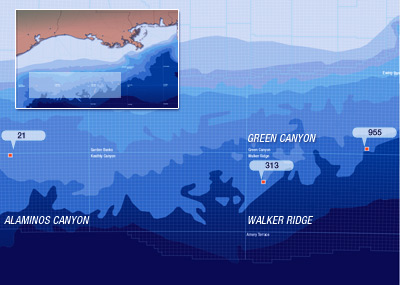 Blocks drilled for gas hydrates in the US GOM

"Prior to this paper, researchers would look for a bottom simulating reflector and were puzzled on why it seemed to be absent in the GOM," explained McConnell, the author of the research.

The programs discovered gas hydrate in saturations ranging from 50 percent to more than 90 percent in high-quality sands.

"And those gas hydrates were in a sand which should have excellent reservoir characteristics," added Adrian Digby, vice president of business development at AOA Geophysics. "So, if you are going to find a producible gas hydrate, we believe this is the sort of places you should look. This is the first step. We believe that we've found the most likely location yet drilled. There's still a lot of work to be done to actually get the gas out commercially, but this is the place to start."

Additionally, gas hydrates may one day produce through existing infrastructure for domestic needs.

"If you look at the deepwater Gulf of Mexico map, you find more and more pipelines, more and more platforms," McConnell continued. "There will be the infrastructure out there to help gather some of these otherwise stranded hydrocarbons."

Processing the gas hydrates is a difficult challenge because of the thermodynamics involved in melting the energy crystals to bring them to the surface.

The pressure and the temperature of the hydrates pose a challenge, but there are teams currently working on developing techniques to produce gas hydrates. In fact, this winter, the DOE and Alaska North Slope operators are planning to conduct gas hydrate production tests in the Arctic. Furthermore, international teams are trying to unlock the gas hydrate mystery, as well.

There are a number of countries collaborating in the gas hydrates research. Although the Gulf of Mexico has just pulled out in front, other regions have been earnestly developing ways to locate and process this new frozen resource, including the Asian countries of Japan, India, Korea and China.

Gas hydrates have been produced or tested in Siberia and Alaska. There are major efforts under way to test and produce gas hydrates in Siberia, Japan and India, but the process for finding them was coincidental. An additional focus of the American program included establishing a genuine methodology for locating the resource that can be used worldwide, and that has been accomplished.

"The same technologies, the same methodology to finding gas hydrates is applicable to other basins," concluded McConnell.

Vignesh  |  June 13, 2012
Is there is a possible of Terrestrial (On Land) Mud Volcanoes having gas hydrates. Or Any relation with Marine Mud Volcanoes Gas hydrates
Rainman  |  June 19, 2009
Very good article! I share with Mr. Kilcreae below the same question as what impact might be expected to the global natural gas market and oil industry. Someone please? Thank you!
Riley Sheffield  |  June 19, 2009
This is very interesting to me since I worked with Japex and JNOC on similar projects. In the Nankai Trough off the coast of Japan are some hydrates that, if economically recoverable, would be very beneficial to Japan, who has limited petroleum resources. In the future it may be possible for other countries in a similar situation to be able to develop natural gas as a source of energy, thus improving their standard of living.
Ibrahim Ninalowo  |  June 18, 2009
This is interesting and fascinating to me because I am presently working on my individual project for my masters program in petroleum engineering, and my project topic is on removal of water from gas hydrates.
Capt. Jody Atterton  |  June 17, 2009
I was first astounded when I saw the possibilities of running the world for 3,000 years on gas hydrates and applaud the effort that has gone into alternative fuel sources; now you have the solution and i think it should be announced loud and clear.

All we need to do now is to invent the wheel on how we use it to lower cfcs to best benefit the world's future for generations to come.

Well done and i look forward to your progress with ever increasing interest and even a little excitement.

Kevin Kilcrease  |  June 15, 2009
To whom it may concern, I believe this is a great discovery,my question is what does this mean to the national and global markets? I am not a educated man but, I am trying to learn more about the industry. Thank you for a response from a Oklahoma roughneck looking for another well to dig.
Richard Mabbett  |  June 15, 2009
Hydrates are a fact of life in the gas industry, where they are usually responsible for plugging up a pipeline where the methanol injection has failed or where the water content has suddenly increased. They are usually removed by reducing the pressure in that section of the pipeline, or by pumping in methanol, or both.

To me, the exploitation of large gas hydrate deposits would seem to be no more difficult technically than exploiting the tar sands. No doubt, it will take a few years to sort out and refine the technology, but I am sure they represent a significant energy resource for the future.

Ralph Smith  |  June 15, 2009
I've been interested in hydrates since first hearing of them a long time ago and have a simple solution similar to a geothermal heating and cooling system for a home. We should put more effort into hydrates and less into bailouts.
Colin Bell  |  June 15, 2009
An elegant solution might perhaps be one or more 50 Mw pebble-bed type reactors (high intrinsic safety/modular design), circulating the reactor primary circuit helium gas through heat exchangers to produce hot seawater, which could then be pumped down to the hydrate strata.
wili  |  June 14, 2009
It is utter madness to risk destabilizing these underwater fields. We are poking at sleeping giants best left dreaming. Wiki "clathrate gun" to get some idea of what we could be pulling the trigger on here.
Gary Barcus  |  June 13, 2009
Excellent article and a true landmark milestone of scientific achievement. Methane hydrate wells have exceptional production capabilities. I hope our Californians are taking note and preparing to approve long, long overdue offshore gas exploration.
John A. Jauregui  |  June 13, 2009
I think this story confirms the rumor that world oil production peaked in 2004 and is now in permanent decline, with little hope finding new large undiscovered oil fields anywhere on the planet similar to Mexico's Cantarell, which is now in sharp decline. What oil is left is our bridge to what ever comes next. I feel it criminal that the Democratic Party is now trying to make this a TOLL BRIDGE through Waxmans Cap&Trade/Carbon Offset Tax bill now before Congress for passage and implementation.
Mark Walker  |  June 12, 2009
Research into gas hydrates has already been carried out by a consortium of O/G companies and government agencies from around the world in the Mackenzie Delta of Nrth West Canada. These research wells named Malik....1,2,3 etc date back into the 90s and early 2000s and continue the research already pioneered by the USGS and Tim Collet. If I'm not correct the last of the research wells produced a small amount of gas by thermal injection techniques before rehydrating and cutting off the gas flow.

Nice to see that Tim can continue to research what he wanted to do 20 or more years ago.