US Refiners Are Riding High With Strong Margins, Tax Boost 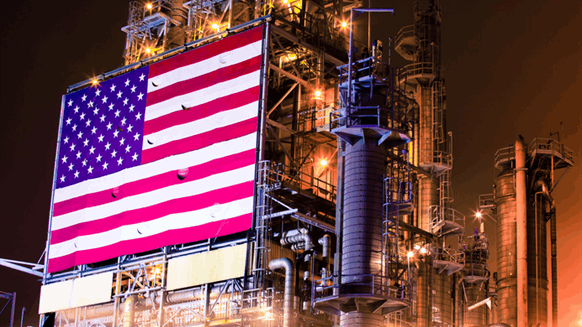 US refiners are off to a strong start start in 2018, even as competitors elsewhere are hitting harder times.

(Bloomberg) -- U.S. refiners are off to a strong start start in 2018, even as competitors elsewhere are hitting harder times.

Independent refiners are poised to cash in on President Donald Trump’s U.S. tax reform. Oil market fundamentals are also looking bright. Gulf Coast refiners ran at record-high levels in the last week of December. The party is set to continue as planned shutdowns will be 45 percent lower this quarter from a year ago, according to data compiled by Bloomberg.

Analysts are bullish with good reason. While some Mediterranean refiners are taking losses on each barrel of crude they process and Asian fuel makers face more competition from China, margins at some U.S. Midwest plants reached $40 a barrel in late December. Gasoline and diesel are leaving Valero Energy Corp. and Marathon Petroleum Corp.’s Gulf Coast plants at a record pace as Mexico and Brazil seek increasing amounts of fuel.

“Refiners have a few factors working in their favor right now,” said Sam Margolin, lead analyst at Cowen & Co. LLC. “Economic indicators point to strong gasoline and diesel demand in 2018. Secondly, the rally in oil prices could be helpful to U.S. refiners.”

“Unlike other areas of energy, refiners not only have U.S.-centric operations but are largely in the black and cash tax payers,” which will strengthen earnings once policy changes, said Blake Fernandez, an analyst at Scotia Howard Weil.

U.S. refiners have the advantage of not only close proximity to abundant crude supply from Texas, North Dakota and Alberta, but cheaper supplies of natural gas and hydrogen that are vital to running their plants.

“If you wrap that together, you get a margin in the U.S. which is quite a bit better than almost all the other large manufacturing centers in the world,”  Dan Romasko, chief executive officer of Motiva Enterprises LLC, said Thursday at the Argus Americas Crude Summit in Houston.

U.S. crude approached $65 a barrel this month for the first time in more than three years, and the government increased its estimate for oil output to more than 11 million barrels a day in late 2019.

Refiners’ margins for producing diesel are now outperforming gasoline by more than $10 a barrel, reviving a typical seasonal pattern that didn’t show up the past two winters, Bank of America Merrill Lynch said in a research note. Refiners maximized their diesel production at the end of last year, boosting output of the heavy-duty distillate fuels to a record 5.6 million barrels a day.

The backwardation in the forward curve, in which near-term delivery of diesel is at a premium to later contracts, points to continued record refinery rates. The longer-term price outlook points to continued low inventories and higher volatility, Bank of America Merrill Lynch said Jan. 5 in a note led by Sabine Schels.

“Low inventories mean the diesel market could be posed for a lot more volatility ahead, as any supply disruptions will reverberate through the market more quickly than previously,” she said.

Still, today’s high times for refiners may be hiding tougher days ahead. Greater competition from refiners from China to Saudi Arabia threatens U.S. hegemony in the Latin American fuel market. Record U.S. operating rates may result in a fresh glut of products, as biggest customer, Mexico, produces more of its own fuel.

Margins in Europe have drooped, and even turned negative at some less-sophisticated plants in the Mediterranean, according to Oil Analytics data. In Asia, China’s fuel exports are set to soar this year, according to the nation’s biggest energy producer.