ExxonMobil 'Puts Guyana on the Map' with Discovery 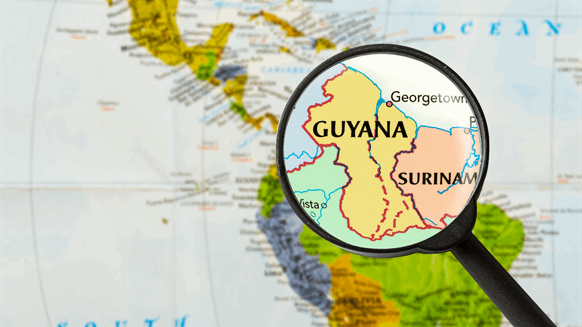 “The results from this latest well further illustrate the tremendous potential we see from our exploration activities offshore Guyana,” ExxonMobil Exploration Co. President Steve Greenlee said in a company announcement. “ExxonMobil, along with its partners, will continue to further evaluate opportunities on the Stabroek Block.”

According to ExxonMobil, Turbot is the latest in a string of discoveries in Guyana. Previous discoveries in the South American country include Liza, Payara, Snoek and Liza Deep. The company said that its affiliate Esso Exploration and Production Guyana Ltd. began drilling Turbot-1 on Aug. 14, 2017, and encountered a reservoir of 75 feet (23 meters) of high-quality, oil-bearing sandstone in the primary objective.

According to Wood Mackenzie, the Turbot-1 discovery “puts Guyana on the map” because the country currently produces no oil.

Wood Mackenzie expects Guyana to be one of Latin America’s top oil producers by 2026 with approximately 350,000 to 400,000 barrels per day of oil production, noted Medina.

“ExxonMobil’s Latin America footprint has increased significantly with its recent stream of discoveries in Guyana and its aggressive bidding in Brazil’s latest licensing round,” Medina said.

Turbot-1 is located in the southeastern portion of the Stabroek Block roughly 30 miles (50 kilometers) southeast of the Liza phase one project, ExxonMobil stated. Esso Exploration and Production Guyana Ltd. operates the 6.6 million-acre (26,800-square kilometer) Stabroek Block and holds a 45-percent interest in it. Others holding stakes in the acreage include Hess Guyana Exploration Ltd. (30 percent) and CNOOC Nexen Petroleum Guyana Ltd. (25 percent).

ExxonMobil also noted the Stena Carron will move to the Ranger prospect. The company added that it plans to drill an additional well on the Turbot discovery next year.

Internet Explorer 10 customer service  |  May 02, 2018
A map is a great thing to find anything.If you have to install google map on your smartphone then you have wanted to find anything by maps.Suppose you lost anywhere then you open your map and find the route.It was very helpful.If you want to know more then follow the site.
Paula Okowa  |  November 16, 2017
What was the bonus about that Exxon Mobil paid Guyana for?
sally radford  |  October 06, 2017
Marvellous news to brighten the gloom at the start of October after a miserable September of natural and human disasters. Science can solve most of the world's problems and leads the way in bringing energy to all. It is up to leaders to promote law and order and create just policies to feed, shelter and educate their citizens. Well done, excellent Exxon, shining star of the Caribbean oil patch.
Winston Imhoff  |  October 06, 2017
With so much potential oil production, why is Exxon Mobile not prepared to build a refinery in Guyana? My question is, at what point will Exxon Mobile consider it prudent to build a refinery in Guyana?.
RELATED COMPANIES
Company: Exxon Mobil Corporation more info