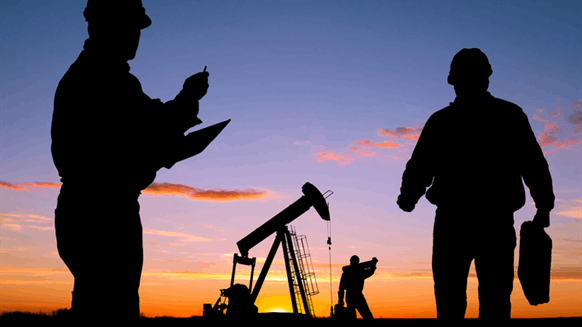 (Bloomberg) -- Not every oilman is gaining from the U.S. shale boom. Just ask Joe Warren.

Warren, a partner at Brown & Borelli Inc., is caught in a historical hiccup, of sorts. More than a third of the 65 to 70 old-line vertical wells his company operates in Oklahoma are negatively affected by horizontal drilling, he says. The new-style wells can run sideways for miles in a shale play, carrying sand, water and chemicals that can leak into older wells, gumming up the works.

The cost: For Warren’s company, it’s about $250,000 a year in lost production and $150,000 in added operating expenses, he said. It’s an issue spurring rising anxiety among small drillers. Already, several lawsuits have been filed while a group representing old-guard drillers is gathering data, aiming to force legislation guaranteeing compensation when damages occur.

Some of Warren’s wells saw a slight drop in output while others, hit multiple times, weren’t salvageable, he said. Warren hasn’t been involved in litigation himself but expects more legal action to occur in the region moving forward, even though cases can be costly and take several years to resolve.

Already, a study by the Oklahoma Energy Producers Alliance, the group representing conventional drillers, has found 451 vertical wells in one county that were negatively affected by horizontal drilling, 80 percent of which were located outside of horizontal well unit boundaries.

The damage can add costs to replace equipment, clean out water or sand, or address environmental damage, according to Mike Cantrell, a board co-chair for the group. It can also kill a well outright, he said.

"I’m afraid when we look into further, we’re going to find out it’s much worse," he said.

Horizontal drilling has allowed producers to tap into shale reserves more economically. When explorers tap shale, they are actually drilling into the rocks where the oil feeding those old-line vertical wells was created. Geologists refer to it as "source rock." The technique allows drilling to continue laterally for up to two miles, replacing the need for multiple vertical wells. Kingfisher County, where Warren’s well are largely located, is part of the so-called Scoop and Stack region, where drilling has increased since the oil slump.

Oil rigs in that area’s Cana Woodford basin have climbed to 62 from 36, just since the start of the year.

Many of the vertical well most affected are so-called stripper wells, which produce a daily average of 15 barrels of oil or less. Though they may be inconsequential to large companies, for small operators, it’s a matter of their livelihood, Cantrell said.

In August, a district court ordered Devon Energy Corp. to pay $220,000 after two operators alleged negligence and "subsurface trespass" that led to two damaged wells. Devon inherited the wells in question from Felix Energy LLC, according to the company.

"Devon always seeks to conduct its operations in a safe and responsible manner, with respect for the rights of other well operators," spokesman John Porretto said in an emailed statement. "When evidence shows that Devon’s operations may have damaged an existing vertical well, Devon is proactive in attempting to negotiate fair compensation for the affected vertical well owner."

The company also noted, "the jury awarded the vertical well owner an amount that was both significantly lower than what was demanded at trial and less than what Devon had previously offered the well owner as compensation to settle the claim."

The case belies a broader problem, said Matt Skinner, public information officer at the Oklahoma Corporation Commission, a regulatory body. The agency tried and failed to require operators to report incidents even if they didn’t cause environmental damage, he said, but couldn’t get support from bigger players in the industry. As a result, companies are not required to report incidents that result only in monetary damage to a well. Those issues must be taken to district court.

The main obstacle has been a lack of data, according to Skinner. So now, the commission is focusing on encouraging vertical well operators to report problems. They’ve confirmed 20 incidents and have at least 55 more pending, Skinner said.

"We know it’s happening, we know it’s an issue," he said. "We have every reason to think there are more incidents out there than we know of."

Cantrell’s organization, meanwhile, is pushing to slow down further development of horizontal drilling until better data is gathered on their effect on existing wells.