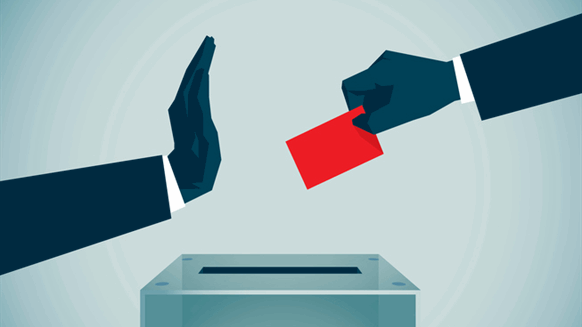 EDINBURGH, Oct 3 (Reuters) - Scotland will block fracking indefinitely after a public consultation found overwhelming opposition to the practice, the British region's energy minister said on Tuesday in a victory for environmentalists.

Scotland imposed a moratorium on fracking, the process of fracturing underground shale rock to release gas and oil, in 2015 and that will now remain for the foreseeable future.

"The decision taken today means fracking cannot and will not take place in Scotland," Paul Wheelhouse told the Scottish parliament in Edinburgh. "Taking account of available evidence and the strength of public opinion, my judgment is that Scotland should say 'no' to fracking."

The method has run into stiff opposition in many countries. Environmentalists say it causes problems including pollution of the water table, and residents of areas where fracking is being considered fear increased noise, traffic and other impacts.

Britain is estimated to have substantial amounts of shale gas trapped in underground rocks but despite support from the central government in London, progress has been slow as environmentalists and local communities lobby against fracking.

The London government approved a shale gas fracking permit for a site in Lancashire, northern England, a year ago, using new powers that allowed it to overturn a local authority decision against the permit the previous year.

In Scotland, advocates of fracking say it could offset the decline in North Sea oil reserves and boost the Scottish economy.

But Wheelhouse told parliament the government's consultation had attracted more than 60,000 responses, of which about 99 percent were to oppose fracking.

Environmental groups Greenpeace and Friends of the Earth both welcomed the news from Edinburgh and said the executive there, run by the Scottish National Party (SNP), was leading the way towards clean energy.

"This is a huge win for the anti-fracking movement, particularly for those on the front line of this dirty industry here in Scotland, who have been working for a ban these last six years," said Mary Church, head of campaigns for Scotland at Friends of the Earth.

But chemical company Ineos, which has a large Scottish operation at Grangemouth on the River Forth, sees shale gas as a potential solution to the decline of North Sea resources needed to provide the base ingredients to make its products.

"It is a sad day for those of us who believe in evidence-led decision-making," said Tom Pickering, operations director of Ineos Shale.

"The Scottish government has turned its back on a potential manufacturing and jobs renaissance and lessened Scottish academia’s place in the world by ignoring its findings," he said, referring to expert reports that found fracking was safe.

Britain's central government, led by Conservative Prime Minister Theresa May, supports fracking. The opposition Labour Party has said it would ban the technique if elected.

George H Grinestaff  |  October 06, 2017
This is not about renewables, but about the environment being a religon to those who worship it. We have been doing hydraulic prop fracturing for decades, just like coal and mineral mining, harvesting the forests and wildlife, etc. etc. etc. However, today we see a total lack of God fearing in the world: Marriage is an option, education is a god, morality is unknown, and what is Truth but one's own thoughts. This leaves the world to Global Warming, Environmental Policy, Abortion, Save the Animals, and yes banning hydraulic fracturing along with many other sound stewardship practices. Hello !!!!
Dan  |  October 05, 2017
Great comments below. They got me interested in this issue again, so I did some research and found this article. http://www.lexisnexis.com.ezai.ez.cwmars.org:3200/hottopics/lnacademic/? . It is from 2009 and you will probably need log in credentials, but the take away I got from it is that studies on fracing have been plagued with bias. EPA studies are focused on irrelevant issues such as the impact of coal fracing (today our main concern is shale fracing), and the conclusions of these studies often blames any issues in residential areas on the citizens instead of on the fracing procedure. I read about numerous examples of towns complaining about unsafe levels of methane in their water, and the decrease in water quantity since local fracing procedures. The EPA's conclusion was that "He reported that he had found "explosive levels of methane" and "toxic levels of hydrogen sulfide in homes," likely "due to the removal of water, rather than to hydraulic fracturing," and that "hundreds of wells had been affected," likely from "older, poorly cemented wells."" That is just a scratch on the surface of this issue, but I thought it would some good food for thought.
N.W.T Aitken  |  October 05, 2017
Just earlier last year Scotland set a record for the amount of electricity generated from renewables which is roughly estimated to be 57% of Scotland's entire electricity needs. Maybe spend a little more time researching than condemning a country you know nothing about!
Lok Man Cheung  |  October 05, 2017
Victory for the comrades - no more fracking!
David  |  October 05, 2017
Amazing that folks are so against renewable energy that they think messing with the planet more and more is a good idea. Are you folks really that blind to think oil is a renewable resource. What happens when fracking sucks out the rest of the oil and there is none left- it doesn't get reproduced you clowns. Try a renewable energy source- we in America are really setting our kids up for a terrible future one where they are behind other countries instead of leading.
Conrad  |  October 05, 2017
Many of us actually do know what the fracking process entails, and how short sighted it is. Sadly many of the fracking companies or investors care little or actually understand that the rock strata and subsystems lying undisturbed for millions of years are best kept that way as they form the land we live on and off. Land tremors, re routed drainage systems, shattered natural aquifers, all unnecessary. Seriously, the future is in renewable energy, not one shot wonder make a quick buck energy. It has nothing to do with identity politics, its just common sense.
Not SUre  |  October 05, 2017
Not sure people are really that keen on flammable water. Damn lefties.
Ozy  |  October 05, 2017
Hydraulic fracturing is not as safe as most with only economic interests would have you believe. There is always risk and the risk is always bared by the ones that have to live with it in that environment after all is said and done.
Patricia Cunningham  |  October 05, 2017
I am only sad that the UK government has issued fracking licences. Fracking would affect the lives of people,wildlife and the environment. There are no radicals in the anti fracking group I belong to, we have researched and looked at fracking from both sides and decided we do not want fracking in the UK. A definite vote loser for any government.
Henry Hooper  |  October 05, 2017
it's a moratorium, not an outright ban. Still its effectively a ban....at least until someone, anyone can prove that's safe. PWC stated outright after a lengthy study that it would boost Scotlands GDP at best by a whopping 0.1%....the ban means very little compared to the poisoning of aquifers and natural beauty. Well done SG......
Bernard Stewart  |  October 05, 2017
Typical of the ignorance that prevails in Scotland. Only recently a report was issued from academia that claimed that Scotland would run out of oil in 10 years time. Anyone with a passing aquaintance with the industry would know what a load of rubbish that is.
John H.  |  October 04, 2017
Very sad that Fracking has now been hijacked into the world of identity politics. It seems likely that many of the 60,000 responses came from Scotsmen who will disapprove most measures and policies approved by the central government in London for no legitimate reason at all, i.e. just to be bloody-minded. So sad
Ben Lehr  |  October 03, 2017
It is unbelievable how so many people can be so ignorant of a process, what do they think energy comes by flicking a switch. Your available information seems to be one sided and for the most part average person as no Idea what is involved in fracing yes fracing not fracking. What does Scotland want the rest of the world to explore for energy while they import energy at a staggering cost to the average household. Time to step up and take some of the burden on your shoulders Scotland you have been hand fed by the English long enough this is another way to stay under UK
M Webb  |  October 03, 2017
Once again radical liberals lock up God-given resources due to unfounded hysteria. 60 years of fracking in the US; nearly 2 million wells, and not one documented incident. It is perhaps one of the safest industrial techniques in history, and it leads to the use of natural gas which to even most liberals is preferable than coal. Bizarre and twisted thinking - sad!