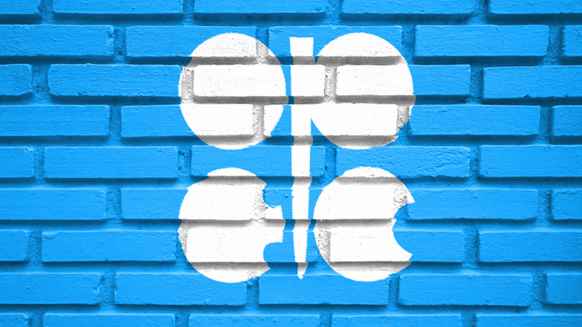 OPEC forecast higher demand for its oil in 2018 and pointed to signs of a tighter global market.

LONDON, Sept 12 (Reuters) - OPEC on Tuesday forecast higher demand for its oil in 2018 and pointed to signs of a tighter global market, indicating its production-cutting deal with non-member countries is helping to tackle a supply glut that has weighed on prices.

In a monthly report, the Organization of the Petroleum Exporting Countries said the world would need 32.83 million barrels per day (bpd) of OPEC crude next year, up 410,000 bpd from its previous forecast.

OPEC said inventories were falling and that an increase in the price of Brent crude for immediate delivery to a premium over that for later supplies, known as backwardation, raised hopes that a long-awaited market rebalancing was under way.

"This is due to the shooting up of demand for prompt-loading barrels and amid increasing sentiment that the oil market will rebalance over the next year with a major drawdown in crude and product stocks," OPEC said in the report.

"This first stirring of backwardation since oil prices were above $100 a barrel is seen as a sign of tightening supplies and strong demand."

Oil last traded above $100 a barrel in 2014, the year in which prices began to slide due to excess supply. Crude extended gains after the release of Tuesday's report, although at about $54, it is still half the 2014 level.

In a deal aimed at clearing the glut, OPEC is curbing output by about 1.2 million bpd, while Russia and other non-OPEC producers are cutting half as much, until March 2018.

Ministers are discussing extending the pact by at least three months.

Demand Up, Supply Down

OPEC raised its forecasts for global oil demand growth in 2017 and 2018, saying consumption would rise by 1.35 million bpd next year, 70,000 bpd more than previously thought.

The report also said OPEC's output in August declined by 79,000 bpd from July to 32.76 million bpd, citing figures from secondary sources such as consultants and oil-industry media.

The secondary-source figures mean OPEC's compliance with its pledged output cut stands at 83 percent, according to a Reuters calculation, down from 86 percent initially reported for July but still high by OPEC standards.

Supply is rising outside the group, although not quite as fast as OPEC thought.

OPEC estimated supply from non-OPEC countries next year would rise by 1 million bpd, down 100,000 bpd from the previous forecast, citing downward revisions to Russia and Kazakhstan.

Should OPEC keep pumping at August's rate, the market would see a small supply deficit next year, versus a 450,000-bpd surplus implied by last month's report.

Thaddy  |  September 16, 2017
Believe that in New Zealand we are seriously over charged for petrol
RELATED COMPANIES
Company: OPEC more info