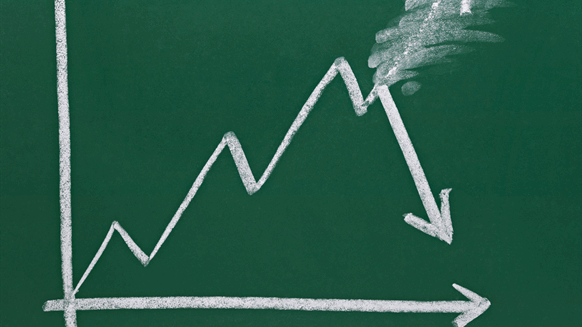 EnQuest reports a sharp drop in first-half profits on lower production and delays in ramping up its flagship Kraken oilfield.

EnQuest kept its previous full-year production guidance, which calls for a fall of as much as 18 percent to 10 percent above or below its output in the first half of the year of 37,015 barrels of oil equivalent per day (boed).

The company reduced its expected capital expenditure this year to the lower end of previous guidance at $375-$400 million.

Spending on Kraken was expected to be lower by $100 million, bringing the project's cost to $2.4 billion, around 25 percent below its original budget in 2013.

EnQuest shares were down 3 percent in early trading at a one-year low. The London-listed company's shares have dropped sharply since it forecast last month the fall in output due to delays in bringing Kraken's floating production, storage and offloading vessel into operation.

Other operational issues and the lack of recent drilling in other fields will also affect production, it said.

EnQuest is confident it will resolve issues related to Kraken, which started production in June, by the end of the year and reach a production plateau of 50,000 boed in the first half of 2018, Chief Executive Amjad Bseisu said in an interview.

"Kraken is a complex system ... so we are not getting the efficiencies that we had hoped for but I think things are improving now," Bseisu said, adding that Kraken's reservoir and sub-sea equipment was performing according to expectations.

The first cargo of crude from the heavy-oil field is expected to load next week.

"We are reassured by the fact that the issues in the commissioning phase are facility related, as these are more easily fixed, rather than reservoir," JP Morgan analysts said in a note, maintaining a "neutral" recommendation.

Kraken is one of a string of new North Sea fields that have started producing in recent months, heralding a small revival in the mature basin despite persistently weak oil prices.

EnQuest's earnings before interest, tax, depreciation and amortisation (EBITDA) for the first half of 2017 fell to $151 million from $243 million a year earlier, broadly in line with the $153 million expected by analysts polled by Reuters.

Net debt increased from $1.8 billion at the end of 2016 to $1.92 billion by June 30, 2017 but is expected to come off as Kraken increases production, Chief Financial Officer Jonathan Swinney said.

EnQuest has received all regulatory approvals for its acquisition of the Magnus field and Sallum Voe terminal from BP and expects to complete the deal by the year-end.