France Plans to End Oil Output by 2040 With Exploration Ban 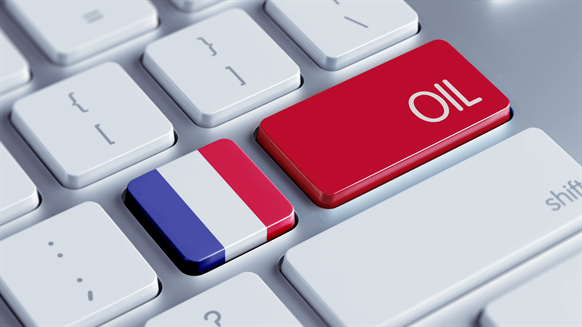 France will stop granting new exploration permits next year as it seeks to end all oil and gas production by 2040, according to a draft bill presented at a cabinet meeting.

(Bloomberg) -- France will stop granting new exploration permits next year as it seeks to end all oil and gas production by 2040, according to a draft bill presented at a cabinet meeting Wednesday.

The move would allow the government to turn down more than 40 exploration requests already made, while some existing permits may be extended to respect contracts, the presentation showed. That includes the Guyane Maritime license off French Guiana, in which Total SA has a stake, according to an adviser to Ecology Minister Nicolas Hulot, who briefed reporters in Paris.

This legislation would “allow us to progressively free ourselves,” Hulot said after the cabinet meeting, also confirming that current exploration permits off French Guiana would remain valid. “It will allow investors to go much further in their renewable investments. Currently oil and gas leave us dependent on geopolitics.”

The proposed legislation is part of President Emmanuel Macron’s broader plan to take the lead against climate change, after U.S. counterpart Donald Trump ditched the landmark Paris agreement to fight global warming. While France’s oil and gas output is small, the plan may affect companies such as Vermilion Energy Inc., which has several concessions, and could reduce the prospect of discoveries off French Guiana.

France pumped 6 million barrels of oil in 2015, covering just 1 percent of its demand, according to the presentation. Oil and gas exploration and production on French soil generates as much as 300 million euros ($358 million) in annual revenue, and accounts for as many as 5,000 jobs, directly and indirectly. Existing production licenses wouldn’t be extended beyond 2040 under the proposed law.

“We do not expect this new legislation, if passed, to have a material impact on Vermilion as our operations are focused on development activities such as well-workovers, infill drilling and waterflood optimization,” the Calgary-based company said previously.

Under a plan presented by Hulot in July, France will end the sale of gasoline- and diesel-powered vehicles by 2040. It will also progressively increase taxes on fossil fuels, close coal-fired power plants by 2022 and invest more in renewable energies.

Kim Alexander Zorzi  |  September 11, 2017
Way to go France. You have begun to realize that energy can be created without burning fossil fuels. Only people who are involved in fossil fuel production would make the kind of negative comments seen here. My house is off the grid and I drive an electric car. I produce my own energy to power my house. It is not solar or wind power either. My electric car has unlimited miles since it carries its own power station. No I am not going to tell you what it is. We can be freed from the copper power lines that binds us to pay pay pay. France has woke up and smelled the coffee.
Mohammed Khan  |  September 11, 2017
Commitment to thwart something inevitable is being practive. Fossil fuel reserves Will deplete, WILL become more expensive, will cause indirect expenses as war and investment in bases, armament and loss of image....all of which are non productive investments and could be done away with as intelligent a move as the French are making. But Intelligence today is in rare supply in governments these days, ego is a-plenty.
hour  |  September 08, 2017
France supports nuclear sector activities ONLY because its perfectly safe, there is no pollution or waste and this is the future agreed by all the countries ;-)
Leonard Harvey  |  September 08, 2017
What they fail to mention is that as a substitute companies like Total are already investing heavily in renewable energy sources and most intelligent organizations realize that with the next few decades Peak Demand for oil, rather then Peak Oil will drive the reduction of reliance on fossil fuels. France is just ahead of the game, and I am not French btw!
Russell Berryman  |  September 07, 2017
Just when you thought the French couldnt get any stupider. They outdo themselves.
ROD  |  September 07, 2017
Looks like the nuts have taken over the asylum! This will get rid of the foul smell of diesel exhaust, but at what cost to the economy? Good luck France on this monumental decision!
daniel barrett  |  September 06, 2017
Wow. I'll bet that they won't refuse the taxes and fees generated from Service companys who's income is primarily oilfield related. Make a real statement. Refuse to accept ANY income from an oil related industrial activity. Then I'll believe that this is more than a publicity stunt.