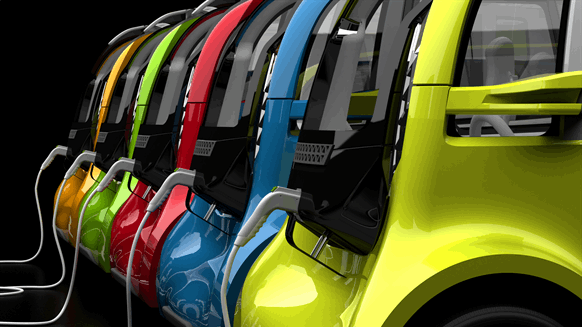 What are the key assumptions for a 'carbon-constrained scenario'?

Electric vehicles (EV) constitute a very small share of all cars on the road worldwide. According to the International Energy Agency (IEA), the total number of EVs hit 2 million in 2016. Compare that to the nearly 1.3 billion figure of all vehicles worldwide, according to 2015 figures from the International Association of Motor Vehicle Manufacturers, and it's clear that EVs do not currently represent a personal transport juggernaut.

EV penetration in the global vehicle fleet could be considerably greater less than 20 years from now, however. A recent study by Wood Mackenzie and GTM Research predicts that more than one in five vehicles worldwide – or more than 350 million units – could be powered by electricity rather than the internal combustion engine. The study's authors foresee such a sharp EV growth trajectory under what they call a "carbon-constrained scenario."

"The carbon-constrained scenario accelerates and extends the impact of EVs, renewables and energy efficiency," Paul McConnell, Wood Mackenzie's research director for global trends, explained to Rigzone. "It builds an increased role for energy storage technologies, and provides access to decarbonized electricity for millions across the developing world. It posits a world in which the energy industry, policymakers and the general public are focused on minimizing the environmental impacts of their behavior. Accelerated decarbonization and lower consumption are embedded in this scenario."

No Small Feat, But…

Achieving a point where EVs make up more than 20 percent of the world's vehicle fleet would represent a significant milestone, but McConnell cautions that EV uptake faces some formidable obstacles. When asked what the biggest "ifs" are for EVs to become more widely accepted, he ticked off the following list:

A common criticism of initiatives to boost the acceptance of EVs and renewable energy has been that they need government support to gain traction in the market. (Consider the U.S. mandate that almost all gasoline sold at retail outlets contain ethanol, federal EV tax incentives and various measures in Europe.) Although he envisions an ongoing government role for providing market frameworks to expand decarbonization, McConnell said the "critical factor in the carbon-constrained scenario" is that the technology will need to mature. In other words, EV and renewable technologies will need to stand on their own proverbial two feet.

"Here we see a world where low- or no-carbon technologies are increasingly able to compete on an economic basis," McConnell said. "Decarbonization begins to happen in spite of policymakers, not because of them. This is a really significant change from where we were 20 years ago, when policies like the Kyoto Protocol were being developed."

Aside from any advances in EV technology, auto manufacturers will need to offer products that people actually want to buy – without benefit of government subsidies.

"EVs need to prove themselves to the consumer to take off," McConnell continued. "This means they need to be a good or better substitute for existing vehicle offerings – and right across vehicle segments. If manufacturers struggle to make a true mass-market EV then sales will not take off."

"There are a number of Chinese manufacturers who are aiming at exactly that segment of the market," he noted. "If sticker prices of EVs approach parity with internal combustion cars, they will be pretty attractive to consumers because the running costs are so much lower."

What Could This Mean for Oil And Gas?

If these various factors actually do pan out, McConnell said that some within the oil and gas industry could still see some upside even with a wholesale – albeit gradual – shift toward renewables.

"It's a difficult scenario, certainly, but it's not all bad news," noted McConnell. "Hydrocarbons – including coal – still meet 75 percent of global energy demand in 2035 in this scenario. It's a very negative story for coal, but that decline is offset by growth for natural gas demand. Oil peaks and then declines, but demand only falls back to about where it is today – there's still going to be a big market to satisfy."

McConnell also expects cost pressures to be "inescapable" for oil and gas players in a carbon-constrained world.

"Those at the bottom of the cost curve will be highly advantaged," he concluded. "Those with a high balance of gas in the portfolio should also do well through the medium term, but if renewables really surprise to the upside some of that demand growth could be at risk, too. Watching the development of energy storage technologies is really critical here."

p2  |  August 27, 2017
Nice to see people saying the same uninformed things in the comments. If the price goes down as it has been for the last blah blah years... So? If an asteroid hits the Earth, I wont have to worry about a car. Look, prices for batteries have been declining. But hey obviously wont keep declining indefinitely, go past zero, and manufacturers start paying us to take batteries off their hands, right? So what is the floor price for batteries? Who knows? We know it exists, but where exactly it is a mystery. Price declines for batteries could stop tomorrow for all we know. Probably not, but...? Will the decline for another 5 years, or 20? That answer has an enormous impact on where you end up. Also, each drop in price in batteries, the cost of the battery becomes a smaller and smaller component of the total car cost. What is the base cost of the car without batteries? Even if batteries do continue their slide, at some point, it has very little impact on the price of the vehicle. Lastly, people talk about a $35k car like it was something special. A base model Chevy Malibu is around $24k. So...we have a ways to go before a electric car is really a value. Overall, happy with the direction things are going. But I wish the silly talk would stop.
scott allen  |  August 25, 2017
The EV relies on a lithium battery (about 35 pounds per vehicle in the case of a Tesla). The know reservers for lithium were in the range of 40 million tons, the current usage is in the range of 1 to 1.5 million tons a year, that is used for your cell phone, laptop and other toys. The total amount of vehicles projected in this story (23 million) would use up more then 100% of the known reservers before the 23 million vehicle were built. The lithium battery for vehicles, large scale home, wind farm, solar plants is not sustainable.
ZivBnd  |  August 25, 2017
Battery prices will need to fall fast enough so that sticker prices reach parity with internal combustion engine-powered vehicles Not really. Battery prices are already low enough for the base versions of the Bolt and the III to sell at $37k and $35k, respectively. So if they prices continue to drop at around 10% a year, as they have for 8 years, we will see these $10,000 packs drop to just $7,300 in a mere 3 years. Electric intent drive train parts have been dropping just as fast so these $35k base version cars will be below $30k by 2020. Charging infrastructure will need to be rolled out so that drivers can charge their EVs when and where they want. Again, not really since 98% of the time we charge at home overnight where fast charging infrastructure makes no difference at all. I want to charge my car at home where it is convenient, not at some fast charger. Admittedly, 2 or 3 times a year I will take my car on a roadtrip where the existing DCFCing network is too limited and too slow. But the 75 kW charge rate fast chargers are arriving now (Tesla is already at 120 kW charging) and as more Bolts and Leafs are purchased, the DCFCing network will expand to suit. The battery supply chain must ramp up enormously, and it needs to incorporate battery recycling. True, and we are seeing that ramp up happening already. The Gigafactory is a work in progress and LG Electronics just opened a plant in Michigan to complement the LG Chem plant that is there already, and which is expanding as well. There are cell factories opening all over the world. Packs will be re-purposed at end of their auto life, then recycled, so the packs that are in cars being sold today wont be repurposed until 2029-2031 and they wont need to be recycled until 2036-2041. These packs are lasting a LONG TIME! Other than the early Leaf packs, that is.