If Petronas Can't Beat US LNG Suppliers, It Could Join Them 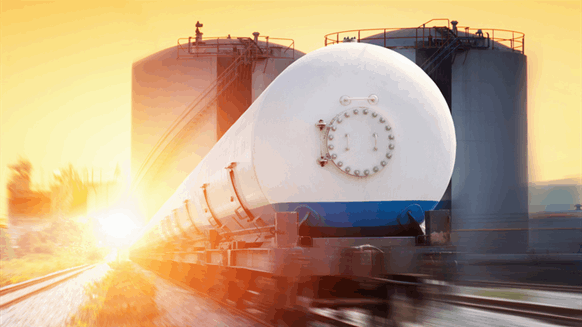 With its Pacific Northwest LNG project now dead, Petronas needs to find a home for the gas produced by its Progress Energy Canada Ltd. unit

(Bloomberg) -- Malaysia’s Petroliam Nasional Bhd has pulled the plug on its $27 billion plan to ship liquefied natural gas from Canada’s west coast to Asia, losing out to U.S. suppliers who got to market first.

Well, if it can’t beat them, it may still join them.

With its Pacific Northwest LNG project now dead, Petronas, as the state-owned company is known, needs to find a home for the gas produced by its Progress Energy Canada Ltd. unit in Canada’s massive Montney formation -- and exporting from the U.S. might be its best bet.

“Given the high quality of Petronas’ liquid-rich shale assets in Canada, it wouldn’t be surprising if Petronas tried to monetize some of them into LNG through a U.S. Gulf Coast facility," said David Austin, a Vancouver-based energy lawyer at Clark Wilson LLP who has advised clients working in the Montney, one of the continent’s most prolific and cheapest sources of gas.

Petronas’ decision to scrap the Pacific Northwest plant underscores how Canada’s natural gas industry has struggled to compete with surging supplies from U.S. shale formations, which are already reaching buyers from Chile to China. As U.S. gas shipments to overseas buyers climb to a record and Canada’s export projects remain stalled, Canadian drillers may have little choice but to send their output through Gulf Coast LNG terminals.

“That resource that we own is world class and highly competitive,” Progress CEO Mark Fitzgerald said on a conference call Tuesday when asked about the possibility of exporting through the U.S. “We’ll look at every option that we can to bring that to market.”

Cheniere is “absolutely” looking at other Canadian natural gas suppliers, Corey Grindal, senior vice president of gas supply, said in a June 26 interview in Houston. “We are in conversations with others.”

Grindal also said Cheniere is in discussions about whether additional infrastructure needs to be built, potentially with a partner, “to get gas from the Montney down to one or both our terminals.” Cheniere operates the Sabine Pass terminal in Louisiana and is building a second near Corpus Christi, Texas.

The Montney, a formation sometimes referred to as the “the Permian of the North” after the massive Texas oil and gas field, straddles the provinces of British Columbia and Alberta. The play holds about 449 trillion cubic feet of marketable natural gas, according to a 2013 estimate from Canada’s National Energy Board. That’s about half the total reserves of Qatar, the world’s biggest exporter of liquefied natural gas.

Canada “has a tremendous resource, but market outlets are limited,” Matthew Phillips, director at Guggenheim Securities LLC in Dallas said.

"There’s just a huge amount of it," said Samir Kayande, director at Calgary-based RS Energy Group. "What they need to do is figure out what the market for that gas is."