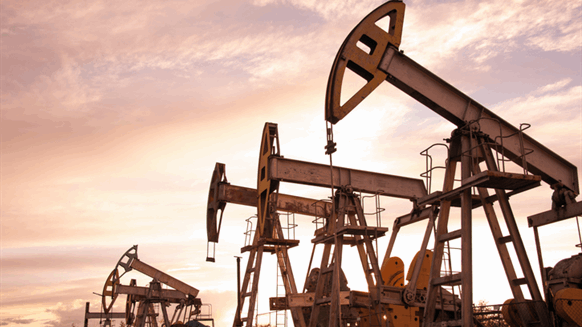 The tussle for supremacy between OPEC and U.S. shale drillers is killing off older oil fields at the fastest pace in almost a quarter century. That could hurt the industry once the current glut has faded.

(Bloomberg) -- The tussle for supremacy between OPEC and U.S. shale drillers is killing off older oil fields at the fastest pace in almost a quarter century. That could hurt the industry once the current glut has faded.

The three-year price slump triggered by the battle for market share choked off funds for aging deposits elsewhere, accelerating their decline. Output at older fields from China to North America -- making up a third of world supply -- fell 5.7 percent last year, the most since 1992, according to Rystad Energy AS. It’ll drop about 6 percent in 2017 if oil stays at current prices, the consultant said.

Oil fell from above $100 a barrel in 2014 to as low as $26 in 2016 as the Organization of Petroleum Exporting Countries opened the taps in an effort to stem the surge in shale production. That set off the worst industry downturn in a generation, forcing cost-cutting companies to focus on higher-margin assets at the expense of older, costlier fields. While OPEC changed course last year and curbed output to boost prices, shale was the main beneficiary and resurgent U.S. output has kept crude below $50.

“A lot of the focus is on OPEC and shale and not on the decline at these mature fields, where supply is struggling,” said Espen Erlingsen, a partner at Oslo-based Rystad. “We’re starting to see the long-term impact of lower oil prices.”

Though new projects mean total global production continues to rise, the slide at aging fields may give OPEC a helping hand by reducing surplus supply today, according to Erlingsen. The danger for major oil companies -- many of which are gathering in Istanbul this week for the World Petroleum Congress -- is that the decline may be difficult to reverse, increasing the risk of future supply shortfalls as spending cuts take their toll for years to come.

“About $1 trillion in investments has been lost in the current downturn,” Saudi Aramco Chief Executive Officer Amin Nasser said Monday at the congress. “Conservative estimates suggest we need about 20 million additional barrels a day over the next five years.”

Oil deposits go through a number of phases, with production initially rising before flattening out and eventually waning as the reservoir pressure drops. About a third of global output comes from mature conventional fields -- about 30 million barrels a day, or around three times Saudi Arabia’s supply -- according to Erlingsen. Their fast-declining supply “is making OPEC’s life a little easier,” he said.

Central to the trend is China, where aging fields provide about half the total production, Rystad said. Volumes from those deposits sank 9.5 percent last year, three times the rate of 2015. Even in the U.S., where shale has risen to prominence, about a third of output comes from fields that began pumping last century. Their supply fell 8.3 percent in 2016 and 11 percent in 2015 compared with an average 4.1 percent in the previous five years, Rystad data show.

Decline rates are picking up because of “lower activity in the mature assets, especially in China,” Erlingsen said. “This shows that the low oil prices are having an impact on production from mature fields, and that we see the non-OPEC, non-shale supply coming down.”

One region bucking this trend is the U.K. North Sea. The area has been producing for decades, and is one of the world’s costliest oil provinces, yet new fields are coming on stream as a result of investments made before the 2014 downturn. BP Plc started its Quad 204 project in May and EnQuest Plc’s Kraken development began output last month.

Still, the bulk of mature regions outside OPEC are on the wane. Consultant Wood Mackenzie Ltd. estimates decline rates at older fields at about 5 percent in 2015 and 2016, compared with “just below” 4 percent from 2012 to 2014.

A decline this year at the pace predicted by Rystad would remove about 1.8 million barrels a day from the market. That’s the same volume as the voluntary cut agreed to by OPEC and its allies last year -- a significant help in the group’s quest to eliminate surplus inventories.

In the longer term, the implications for global supply give cause for concern. International Energy Agency Executive Director Fatih Birol has said lower spending on new production will probably result in a shortfall in the next few years. Conventional-oil project approvals dropped to a 50-year low in the past two years, Birol said in January.

Crude’s collapse has forced companies to eliminate tens of thousands of jobs, sell billions of dollars of assets and defer or cancel expansion plans. With little prospect in sight of a strong price recovery, oil bosses are keeping a tight grip on budgets. The IEA will release its latest assessment of energy industry investment on July 11 in Istanbul.

Eric  |  July 15, 2017
Shale was primarily developed to fill the void expected when the Ukrainian putsch was instigated. The US investors expected the Russians to stop all supplies through the Ukrainian hub to Europe. The oil price was expected to reach the $160 / bl mark. This strategy failed as the supply was not cut and countries like Germany refused to go along with any energy sanctions. The US investors have lost so much money that they are trying to claw back some investment. OPEC are in a way assisting by cutting production but immediately filled by the shale sector. Similar things are happening with the gas sector where the US had developed large export hubs, again before the putsch, expecting a large demand in the EU. Libya and other countries have had their gas production severely reduced. The next attempt to sell and raise prices was to attempt to stop Norstream 2 which again Germany and indeed Sweden refused. Qatar is now coming under attack being the largest gas exporter. The US trying to exploit this possible gap. It should also be noted that there is a move afoot to ensure all exports from the US as to be carried in US flagged vessels, again to quash competition. THe rest of the world will ensure that the oil price stays around the $ 50 / bl mark until shale oil eventually goes completely bust.
Pauliemac  |  July 14, 2017
The markets consistently refer only to the US stockpile of crude as published by the EIA. Shale is a small percentage of the total global supply and we have no figures on the world crude stockpile. (unless someone can show me where?) Every day we see a bull statement like massive oil shortfalls by 2019 followed in the same publication global stockpiles increase OPEC countries not sticking to agreement... other countries produce record amounts.... Its greed. No one wants to give up the cash they were pulling in when oil was $110+ OPEC must make way for shale, they cannot kill it, they tried. The need to relinquish their position and give share. Its the only way.
james  |  July 14, 2017
No decline in Shale? Really? Stop drilling and completing on those fields. Look how much the Bakken dropped after 1015. Shale is a farce and the Red Queen, 2 of 19 shale companies in the Permian made money in the last year. Not a very realistic play.
Randy Hayes  |  July 11, 2017
I agree, about damn time for another shortage.
Alan Newman  |  July 11, 2017
Alleluia!
Tim Albus  |  July 10, 2017
About damn time!
RELATED COMPANIES
Company: OPEC more info