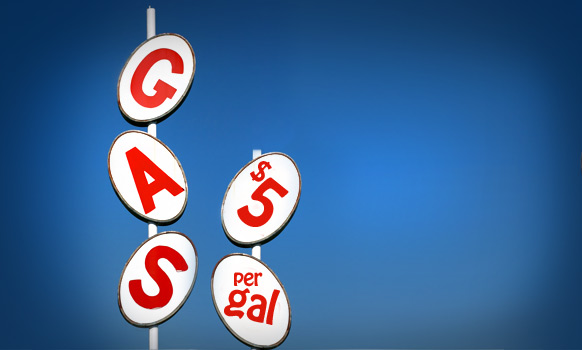 A former Shell executive's projections that gasoline prices will soon hit $5 have generated much attention lately.

Recent television news show visits by John Hofmeister, former president of the U.S. subsidiary of Royal Dutch Shell (RDS.A-NYSE), have led to a wave of media stories about his projections that gasoline prices will hit $5 a gallon before very long.

Mr. Hofmeister suggests that due to rapid crude oil demand growth coming from developing economies such as China and India, world oil prices will rise and send gasoline pump prices skyrocketing in the United States.  Many people are questioning Mr. Hofmeister’s analysis given the current surplus of global crude oil production, the large gasoline refining capacity surplus in the United States and the damage to the economy caused by high oil prices needed for $5 a gallon gasoline prices.

Many people are questioning Mr. Hofmeister's analysis given the current surplus of global crude oil production

As Mr. Hofmeister was talking, the Chinese government was acting to cool its auto market and its economy overall.  By raising interest rates on Christmas Day, the Chinese government hopes to cool off its economy.  In the capital city of Beijing, the metropolitan government instituted measures to restrict the number of cars that can be sold in the city next year.  This action, designed to help reduce traffic congestion, is accompanied by other steps such as increasing parking fees in the city while reducing them outside, building more roads, restricting the number and use of government vehicles, and incentivizing citizens to use mass transit.  There also will be restrictions against non-Beijing licensed cars entering the city during rush hours.  The decision to limit the issuance of license plates to 240,000 next year, or about a third of the number of cars estimated to have been sold this year, however, was a greater reduction than anticipated and sparked a surge in car sales before the rules were scheduled to go into effect.

China’s other major city, Shanghai, began auctioning license plates in 1994, along with restricting non-Shanghai cars from using city roads during rush hours.  According to Chinese media reports, the license fees in Shanghai are now averaging about $6,000 per car.  The media also reports that since the city instituted the license restriction measure, traffic that once crawled now moves much better and, in fact, better than it moves in Beijing.  Of course, the greatest criticism of Beijing traffic comes from its poor urban planning.  By separating residential from commercial sectors, the government has increased the length of citizens’ commutes and the need to drive to work and shopping.  Poor planning was further impacted by low parking rates charged in commercial areas that promote the purchase and use of cars over mass transit.  Maybe the government’s actions will help ease some of the city’s traffic congestion, which saw a “commuter pain” report issued by IBM (IBM-NYSE) earlier this year rank Beijing’s traffic equal with Mexico City for the most onerous traffic among 20 major world cities surveyed.

By separating residential from commercial sectors, the government has increased the length of citizens' commutes and the need to drive to work and shopping

Less than a week after the Beijing announcement, the Chinese government confirmed rumors that it would end the special sales tax break for small cars that had been in effect for all of 2010.  The tax rate will return to its original 10% rate that existed prior to 2009.  The rate was lowered in January 2009 to 5% following the global financial crisis in an attempt to stimulate economic activity.  The rate was raised to 7.5% in January 2010.  The government now believes that restoring the 10% rate will help cool the economy and ease carbon emission problems.  The government has maintained its historic 40% tax rate for large, fuel-inefficient vehicles throughout the economic downturn.  What remains unknown is whether the government will end its cash subsidy for buyers of certain fuel-efficient vehicles with 1.6-liter or smaller engines.

The conclusion of auto industry analysts is that these Chinese government actions will cut the rate of auto sales growth to 8%-10% from the 34% projected for 2010 and the 25%-a-year average for the past decade.  The 2010 growth rate may be higher as the government’s steps pull new car sales forward from 2011.  The potentially greater problem for the auto industry may be a shift in emphasis to smaller cities and rural areas where the focus tends to be on smaller and cheaper cars.  But even in certain rural provinces governments are moving to restrict the number of cars sold.  The Wall Street Journal wrote that based on state media reports, “the wealthy eastern provinces of Jiangsu and Zhejiang are also considering measures to tighten car use, such as requiring residents to secure a parking space before being allowed to buy a car.

One does wonder whether the decision to reinstate the higher sales tax on small, fuel-efficient cars marks a shift in the government’s strategy toward its auto industry.  Long-term projections assuming the continuation of the lower sales tax rate showed that by 2015 the Chinese auto manufacturing industry would move into an oversupplied situation.  Even though Beijing accounts for only about 5% of the Chinese auto market, its move may be followed by more cities.  Since the Chinese auto industry is made up of domestic producers and many joint ventures between western auto companies and local producers.  If the market slows dramatically, it is likely the government will act to favor domestic manufacturers over the joint venture companies.  One outcome of a spreading of Beijing’s restrictive policies could be a reduction in auto sales necessitating a reduction in manufacturing and an earlier date for industry overcapacity.  That scenario might cause auto manufacturers, especially the joint venture companies, to step up export sales.  That, in turn, could lead to overcapacity on a global scale and reduced profit margins for auto manufacturers.  We doubt any of these potential negatives are built into stock market valuations and energy industry expectations.  Fewer cars manufactured means less oil and gas sold in the future.