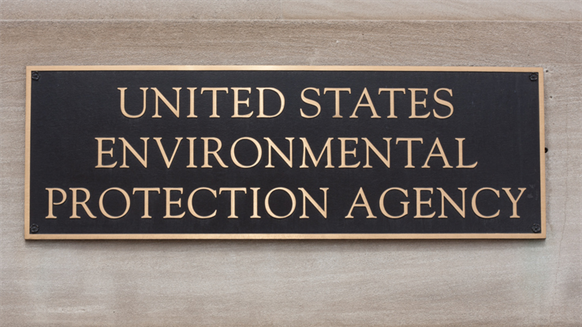 The White House's proposed 2018 EPA budget, with the biggest proposed cut for any federal agency, comes as Trump seeks to clear away regulations he claims are hobbling U.S. oil drillers, coal miners and farmers. The proposed cuts are a starting point in negotiations with Congress, and could be tempered.

"Consistent with the President's America First Energy Plan, the budget reorients the EPA's air program to protect the air we breathe without unduly burdening the American economy," a summary of the agency's proposed budget said.

Scott Pruitt, the EPA administrator, disputes that human actions are the lead cause of climate change and in his former position as attorney general of oil-producing Oklahoma, he sued the agency more than a dozen times. Pruitt believes Congress should determine whether carbon dioxide is a pollutant that needs regulation. With both chambers currently led by Republicans, and influential committees headed by lawmakers from oil-producing states, that is unlikely anytime soon.

The budget would also eliminate some $100 million in spending on research and international programs on combating climate change.

Trump also doubts the science of climate change and has said the country can reduce green regulations drastically without compromising air and water quality.

Mick Mulvaney, Trump's budget director, told reporters the EPA's core functions and beyond "could be satisfied by this budget" and the agency would have flexibility in how to implement cuts. But he was direct in describing Trump's vision. "The president wants a smaller EPA," he said.

But the EPA had already faced sharp cuts under Obama. Janet McCabe, a former EPA air official, said the proposed budget would not only harm the ability of the agency to respond to emergencies, it would hurt day-to-day efforts on keeping air and water clean to protect human health.

Turn Back The Clock

The proposed cuts would extend well beyond climate change. It would cut some $427 million to regional pollution cleanup programs, including in the Great Lakes and Chesapeake Bay. Funding for the Superfund program to clean up the nation's most contaminated sites would drop by $330 million to $762 million.

The budget summary said the rationale is to give local and state governments - often facing severe budget constraints themselves - responsibility for such clean-up efforts.

Trump's proposal would also cut the budget for the EPA's enforcement division, which fines companies for pollution, by 31 percent. It would axe dozens of other programs including the popular Energy Star appliance efficiency program aimed at reducing U.S. energy consumption.

Environmentalists blasted the plan, saying it would return America back to 1977 when smoggy skies and polluted rivers pushed lawmakers to strengthen federal clean air and clean water laws. "Turning back the clock to 1977 will not 'Make America Great Again'. It will 'Make America Gag Again,'" said Conrad Schneider, the advocacy director at Clean Air Task Force.

One area that would see a small boost is for State Revolving Funds, low-interest loans for investments in water and sanitation infrastructure. The budget would add $4 million to the funds, bringing its budget up to $100 million.