Technology will play an important role in execution of the anticipated E&P activity in the United States.

“It’s been tremendous what has happened with technology,” Hamm said. “We’re not predicting that we’ll see increases this year in the overall cost portion because we tend to offset any cost increases with additional technology efficiencies.”

Ventura said Range Resources is trying to use Big Data in real time to help drive decisions within the Marcellus. And though technological advances are occurring in the industry, Walker believes more can be done.

“Unfortunately, I think our industry is way behind Silicon Valley,” said Walker. “There’s a lot of things we can learn and catch up with from Silicon Valley’s advanced technology. Whether it’s the machine learning and augmented intelligence being able to read seismic data in ways humans can’t or being able to understand how to process and use data analytics and artificial intelligence … for example, I have terabytes and terabytes of seismic data that I might use five percent of.”

Walker said plays such as the Delaware, in which Anadarko is spending $1.3 billion on infrastructure buildout, will be costlier, but he hopes to offset that by driving down costs per well through efficiency measures.

Effects of a New Administration 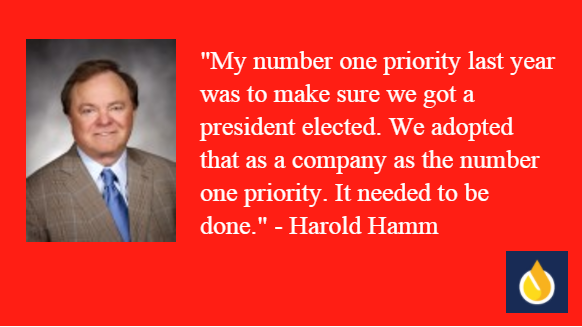 The oil and gas industry has had eyes on Donald Trump since he stepped foot in the White House, namely because he’s been touted as pro-energy, pro-business and pro-jobs.

While Hamm took every opportunity to praise Trump, the CEOs seem optimistic about the future of E&P under a new administration.

“My number one priority last year was to make sure we got a president elected. We adopted that as a company as a number one priority. It needed to be done,” said Hamm. “We’ve seen our industry here in America come back from the brink of extinction. We’ve got a very unique president today. He’s unique in the political world because he keeps his promises.”

Walker said with a pro-business administration, he’s positive about the outcomes in terms of what it means for the potential of energy independence in North America.

“One of the things we need in the Marcellus is more pipelines, which I think are coming,” said Ventura. “And Washington will be very supportive of all that infrastructure.”

Regulatory woes were also an issue for many oil and gas leaders who felt overregulation kept the industry from moving forward.

Hamm said Trump saw the energy renaissance as a driver of the American economy.

“In the deepwater Gulf of Mexico, we were getting pretty critical in terms of how much more regulation we could take on and still have an industry,” said Walker.