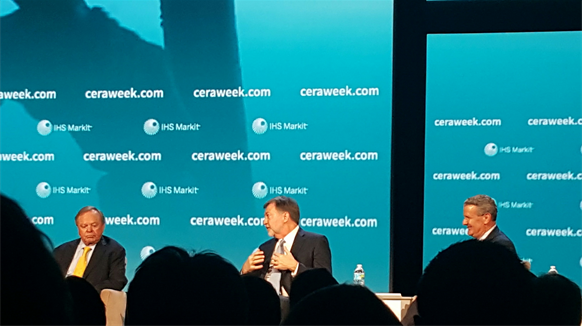 What a difference a year makes.

The tone of this year’s CERAWeek by IHS Markit conference reflected the attitude and mindset shift of many in the oil and gas industry. There was more talk of E&P (exploration and production) activity and they were welcomed conversations following the harrowing two-plus year global oil glut that eliminated more than 440,000 industry jobs.

Global demand for natural gas is expected to surge in the future, but Ventura believes the United States may have trouble meeting the production requirements.

“Certain oil and gas plays are better than others,” said Ventura, whose company devoted the majority of its 2016 capital budget toward acreage in the Marcellus. “A misconception within the Marcellus and other plays is that all acreage is created equal.”

The reality is there are core areas and sweet spots. Typically, the core area of the play is only 5 to 20 percent of the total area the play covers, meaning 80 to 95 percent of most plays are not core, he said.

“According to IHS, a play-by-play review suggests all of the plays will face sweet spot exhaustion within 10 years except for the Permian and the Marcellus – which most likely means production from these plays could slow significantly prior to that,” Ventura said.

Factoring in projections for natural gas demand in the United States, he believes by 2025, the United States will have to add 77 billion cubic feet (Bcf) per day to offset decline and meet incremental demand.

“Dry das production in the U.S. today is about 71 Bcf per day. The U.S. will have to more than double production from where it is today. That’s no small task,” he said.

With limited core acreage, a lot of non-core drilling will be required in order to meet demand.

“The current futures price of roughly $3 for natural gas is too low and a higher price will be required to incentivize drilling in non-core areas,” Ventura said. “The good news is that on an energy equivalent basis, $3 gas is equivalent to $18 per barrel oil, so there’s ample room for the price to increase without impairing its cost effectiveness.”

While Anadarko’s Walker said his company is very focused on North America, particularly the United States, the company has opted to sell its natural gas assets and non-core gas assets. Anadarko remains with two onshore plays – the Delaware Basin and the DJ Basin – as well as the Gulf of Mexico.

When oil prices were around $30, Continental, which held acreage early in the Bakken, pulled out, leaving a lot of wells uncompleted, said Hamm. Currently, Continental has 185 drilled but uncompleted wells (DUC) in the Bakken; crews have come onboard to start completing them as the industry moves out of the downturn.