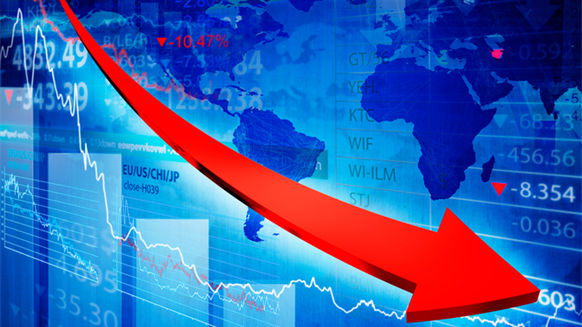 Chevron posts its first annual loss since at least 1980, signaling the difficulties faced by the world’s biggest oil companies as they struggle to emerge from the worst collapse in a generation.

(Bloomberg) -- Chevron Corp. posted its first annual loss since at least 1980, signaling the difficulties faced by the world’s biggest oil companies as they struggle to emerge from the worst collapse in a generation.

The company had a $497 million loss last year and failed to replace all of the crude and natural gas it pumped with new reserves, San Ramon, California-based Chevron said in a statement on Friday. Shares slumped the most in five months.

As the first so-called supermajor oil company to post year-end results, Chevron’s results may herald bleak news for an industry battered by the oil-market crash that began in mid 2014. After hundreds of thousands of job cuts, billions of dollars in asset sales and the accumulation of staggering debt loads to endure the collapse, investors have been optimistic that oil producers who survived the darkest days are on the cusp of a new era of growth.

After the 2016 loss, Chevron probably will be able to cover all of its costs this year with cash flow and generate excess cash as soon as 2018, said Brian Youngberg, an analyst at Edward Jones & Co. in St. Louis. Major oil and gas projects that required huge cash infusions during the past several years are mostly complete and poised to begin contributing profits, he said.

Fourth-quarter net income of $415 million, or 22 cents a share, was lower than all 20 estimates from analysts in a Bloomberg survey. During the final three months of 2016, the company’s refineries earned $357 million, less than half the $762 million expected by analysts at Barclays Plc. Narrower margins and downtime at a California plant eroded performance in the business, according to the statement. Shares fell as much as 3.2 percent, the most since Aug. 1, and were down 2.4 percent at 11:09 a.m. in New York.

Chevron added the equivalent of 900 million barrels of oil to its reserves last year, or 95 percent of what it produced, according to the statement. The new reserves involved oil and gas fields in Kazakhstan, Australia and the Permian Basin beneath Texas and New Mexico. Reserves are a key indicator of future profit potential for investors.

Chevron announced plans last month to curtail spending on drilling and other projects for a fourth straight year, a stark contrast to U.S. shale explorers who are responding to the uptick in crude prices with ambitious expansion plans. While Chevron is cutting its budget for 2017 by 15 percent, shale drillers Continental Resources Inc. and Diamondback Energy Inc. are lifting spending by 77 percent and 106 percent, respectively.

Despite the belt-tightening, Chevron is on pace to spend about $2 billion on shareholder dividends each quarter. That equates to about $1 million an hour. Bigger rival Exxon Mobil Corp. is set to disburse about $3.1 billion per quarter in payouts.

Chevron’s disclosure will be followed by a slew of oil company earnings releases in the next two weeks: Exxon is scheduled to report results on Jan. 31, followed by Royal Dutch Shell Plc on Feb. 2, BP Plc on Feb. 7 and Total SA on Feb. 9.

Brent crude, the international benchmark, averaged $51.06 a barrel in the final three months of 2016, 14 percent higher than a year earlier, according to data compiled by Bloomberg. U.S. natural gas posted an even stronger 42 percent gain to average $3.177 per million British thermal units for the quarter.

Aaron Morris  |  February 06, 2017
The article cited narrower margins on its refineries and considerable down time. Translation: The EROI on Chevrons reserves is circling the drain. They may have replaced 95 percent of their reserves with new plays, but those plays are thermodynamically past the point of diminishing returns. Kazakhstan, Australia, the Permian Basin - reserve size used to be the bellwether of company health. Evidently no more. Paying out shareholder dividends and curtailing investment in upstream production at the same time. These are the behaviors of a company that is aware of its own demise.
bobcat bluey  |  January 28, 2017
As we have all ridden a wave of high prices does not mean or prove to me the top 100 in CVX created this wave or help create the massive profits. The market created the prices with demand around the world! If i was a share holder i would demand to know the salary packages of the top 50 -100 earners at CVX from the top down and then demand a justification (not just sugar coated fluff) in layman terms for the exorbitant pay packets of at least the top 50 and what value is added to the company from those 50 and the top heavy departments over staffed within the company structure! Some management structures have done well within companies i do not doubt that but when a company is struggling or losing money then its time to see if the top 100 are worth anything at all or are just riding market driven waves throughout the good times and floundering in the surf in the tuff times...are jobs being shredded in the wrong places justifying bragging about cutting costs? Which brings me to asking thus; Why the hollywood wages?....i know that the CEO at one stage was/is upwards of 26million a year and upwards of 32million in/around 2013. How can any one person/s be worth that amount of money on a salary and how can any person if on that sort of coin contribute what should be expected regardless of University degrees or business acumen? As a shareholder i would expect that person/s being paid those type of salaries by a public company, not to sleep, eat or have one hour of leisure because CVX is not a privately owned and run company, CVX works for the shareholders not the other way around and its the grunts on the ground that hurt most in these downturns but its those grunts who create the profits.......Its a mess, it leaves me shaking my head. Upper management of any company unless owned by oneself should be capped at a sensible amount with the gap redistributed. The lala land pay days should never have got this far and possibly the half billion loss at CVX may explain itself if some salaries were redistributed. I doubt it, Bobcat :)
RELATED COMPANIES
Company: Chevron Corporation more info