When Tillerson Looked Into Putin's Eyes, He Found Black Gold 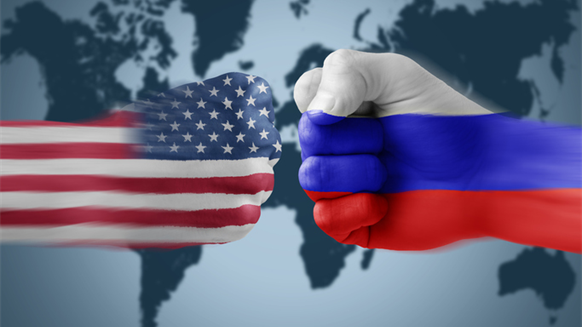 Tillerson has been cultivating Putin since they first met on the Far East island of Sakhalin in 1999, after the retired KGB colonel suddenly became prime minister.

(Bloomberg) -- When Barack Obama and Vladimir Putin met at the Group of 20 summit in Mexico in 2012, Europe was reeling from the Greek debt crisis and the Arab world was aflame from Libya to Syria.

So U.S. officials were stunned when the first thing Putin wanted to talk about was the love affair his oil giant Rosneft was having with Rex Tillerson’s Exxon Mobil, according to a person in the room. Just two months earlier, Putin had personally presided over their latest deal, which gave Rosneft access to cutting-edge drilling technologies and Exxon a share of potentially tens of billions of barrels of oil in the Arctic and in the Black Sea.

Tillerson has been cultivating Putin since they first met on the Far East island of Sakhalin in 1999, after the retired KGB colonel suddenly became prime minister. President-elect Donald Trump hailed Tillerson’s oversight of a company active across the globe in nominating him to be secretary of state last week. But the lifelong oilman will face intense grilling in Congress next month over whether he can put the national interest first, particularly in Russia, where he’s spent almost two decades building a relationship with a former spy Senator John McCain called “a bully and a murderer.”

At the time of their initial meeting, the hard-nosed Texan was balking at committing the billions of dollars needed to reach the rich offshore deposits at Exxon’s Sakhalin-1 project without a stable government in Moscow, a partner in its production sharing agreement. Boris Yeltsin had chewed through four premiers in 16 months before resigning that Dec. 31 after settling on Putin, who was determined to reassert government control over an outmoded industry that had been decimated and privatized after the Soviet Union’s demise.

Tillerson, who like Putin was born in 1952, when Harry S. Truman and Josef Stalin were dividing up the world, quickly won the new president’s heart by standing by Exxon’s cash-strapped Sakhalin-1 partner, state-run Rosneft. He doubled down on the remote and risky development, which is closer to Tokyo than Moscow, later saying work accelerated after Putin took over the country.

“Tillerson met with every minister, governor, everyone who could influence Sakhalin-1,” Igor Yusufov, Putin’s energy minister from 2001 to 2004, said in an interview in Moscow. “He’s gone through everything and knows everything.”

When Exxon and Rosneft’s legal status at Sakhalin-1 was finalized in 1996, the Russian company’s output was just 240,000 barrels a day, a fraction of its Soviet-era peak. Within a decade, the island project alone was pumping a quarter million barrels a day, helping Rosneft fund a wave of takeovers that would boost its production 20-fold to surpass China and even Exxon itself.

For Exxon, Tillerson not only built a cash cow that will pay off for decades, he created an engineering marvel that redefined what’s possible in hostile climes, breaking multiple world drilling records, including a well eight miles long. Impressed by his ability to master one of the most treacherous -- and potentially lucrative -- business environments in the world, Exxon rewarded Tillerson with the dual titles of chairman and CEO in 2006.

But it may be what Tillerson, and his boss at the time, Lee Raymond, didn’t do that earned Putin’s lasting respect -- buy a stake in Yukos.

In 2003, Mikhail Khodorkovsky, who’d assembled Yukos from assets acquired in rigged auctions under Yeltsin, had become an investor darling by championing corporate transparency, while using his unrivaled wealth to challenge Putin by funding opposition lawmakers. He was also trying to sell a chunk of Yukos to Exxon, in part for the political insurance he figured would come with being tied to a huge Texas-based oil company while a Texas oilman was in the White House. Two years earlier, George W. Bush said he looked Putin “in the eye” and found him “very straight-forward and trustworthy.”

Allowing Exxon, or any foreign company, to gain a major stake in Russia’s largest oil producer at the time was unacceptable to Putin, particularly since he considered Yukos stolen property. Officials in Moscow made that position clear to Tillerson, who eventually decided that the downside of doing a deal far outweighed the upside, said Yuri Shafranik, a former energy minister who chairs Soyuzneftegaz, an oil and gas company with interests in Iraq and Syria.

“I told Tillerson and four of his deputies in September 2003 that the powers that be believed Yukos was taken from the people illegally,” Shafranik said in an interview. “He showed deep political wisdom by backing out -- Exxon would not have been able to do business in Russia again if he had not.”

A month later, Khodorkovsky was arrested in his airplane on the tarmac of a Siberian airport. He would eventually serve 10 years in prison on charges including fraud, while Yukos was hit with more than $30 billion of back taxes, broken up and sold off, mainly to Rosneft. Putin appointed his longtime ally, Igor Sechin, chairman of Rosneft in 2004.

Khodorkovsky, who’s now based in London, said by e-mail that he remembers Tillerson as a “good man” who reminded him of the late Viktor Chernomyrdin, a former Gazprom chairman and Yeltsin’s longest-serving prime minister.

john weaver  |  December 22, 2016
Put the right guy in the right job and see how it works out. There will always be naysayers