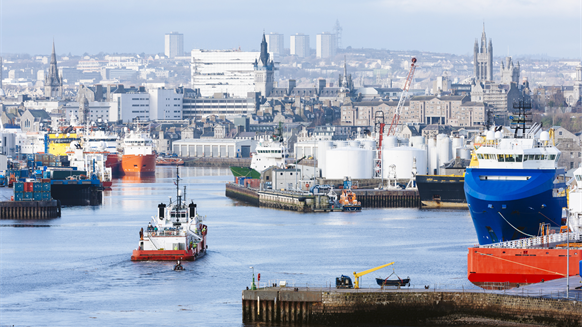 Aberdeen Harbor will expand its facilities into Nigg Bay, to the south of the existing harbor, creating 7,000 additional jobs in the process.

Aberdeen Harbor will expand its facilities into Nigg Bay, to the south of the existing harbor, creating 7,000 additional jobs in the process.

Commencement of the $433 million (GBP 350 million) project, which was recently granted planning consent in the form of Marine Licenses and a Harbour Revision Order by the Scottish Government, was recently sanctioned by the board of Aberdeen Harbor.

The new facilities will include 4,593 feet of new quay, with a water depth of up to 34 feet. An independent study, commissioned by Scottish Enterprise, estimates that the development will generate an additional $1.2 billion (GBP 1 billion) per annum to the economy by 2035, and will create an additional 7,000 jobs. The development is scheduled to be completed by 2020.

Funding arrangements for the project incorporated commercial borrowing from the European Investment Bank, and funding from the Aberdeen City & Region Deal. In January it was announced that up to $358 million would be pumped into Scotland’s economy, as part of a new deal that was designed to support the country’s oil and gas sector.

The funding was earmarked for a new energy innovation centre, an expansion of Aberdeen harbor to enable the city to compete for decommissioning work and measures to support the industry to exploit remaining North Sea reserves.

“We are delighted that, after six years of detailed planning and extensive consultation with our many stakeholders and the regulatory authorities, we are now in a position to approve commencement of construction”, Colin Parker, chief executive of Aberdeen Harbor Board, said in a statement sent to Rigzone.

“The expansion will afford existing customers the opportunity to diversify and expand their interests, whilst attracting new customers and markets to the port, including up-scaled decommissioning activity,” he added.

“This is excellent news for Aberdeen and the Scottish maritime industry, as the signing of the construction contract means this nationally significant project can now get underway in earnest,” Yousaf said.

Aberdeen Harbor is the center of activity for the energy industry’s marine operations in North-west Europe, the Aberdeen Harbor Board stated. Activity at the port currently generates over $1.5 billion to the region’s economy each year and helps sustain around 12,000 full-time jobs.

In May this year the Scottish National Party won the Scottish general election after pledging to support the oil and gas industry, becoming the first party to win a third consecutive term in office.