Changes in capital budgets from 2014 to 2016 were staggering with an average decline of 57 percent across public E&P (exploration and production) companies. Seven E&Ps have CAPEX spending over $1 billion year-to-date with many spending below $1 billion, as of 2Q 2016 earnings releases. 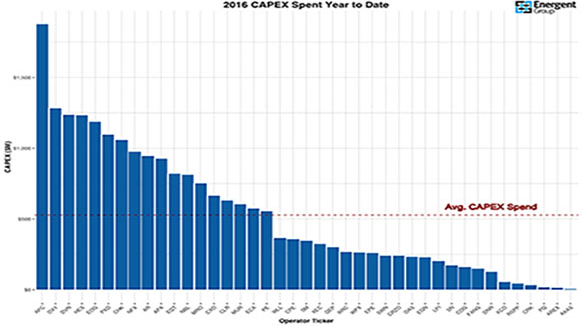 These changes caused a dramatic reduction in the scope of operations for many E&Ps, including:

With WTI remaining in the $40s, expect very few operators to increase budgets in 2017. Limited budgets will continue to restrict the drilling and completions activity for key shale operators.

The Permian, Bakken, Mid-Con, DJ-Niobrara and Eagle Ford hold the majority of uncompleted wells. The uncompleted well count ramped up into 2014 and 2015 hitting almost 6,500 wells within five of the major oil plays alone. 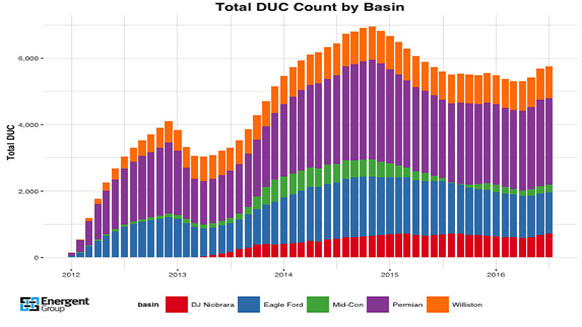 From the perspective of the pressure pumper who is vying to complete the inventory of DUC wells, there will be impacts to pricing. As noted by the ND Industrial Commission (March 2016), there are about 20 frac crews in the state. Based on Energent Group data and conversations with Bakken operators, the active number of frac crews is likely around eight currently. The equipment in some cases is still available; however, the crews have been laid off.

Many operators have optimized their completion designs using higher intensity fracs with longer laterals and higher proppant volumes. The in-basin frac sand suppliers continue to dominate among the sand suppliers.

Sand suppliers will continue to keep a close eye on the DUC inventory, especially with nearby transload and rail facilities in Permian, STACK, SCOOP and Williston.

The longer lateral trends are clear in the Eagle Ford, Permian and Williston. The average lateral length in each basin increased from 2014 to 2015. 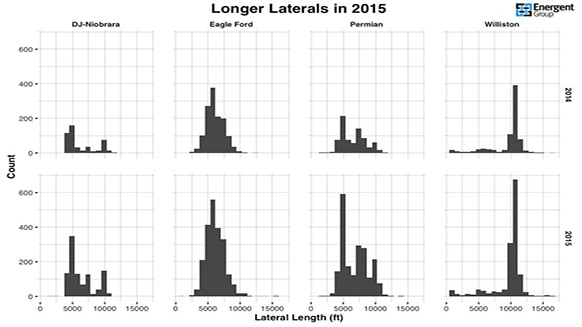 Today, there are few operators continuing to drill and complete wells. Most notably, Pioneer Natural Resources stated a “no backlog” stance in a recent investor call. However, it remains to be seen if this strategy continues while WTI remains in the $40/bbl range for an extended period of time. Several other operators, including Continental Resources, EOG Resources, Oasis Petroleum and Whiting Petroleum have started completing DUCs or expect to as oil returns to $50/bbl.

Just as the Permian has led the drilling activity, expect the DUC inventory reductions to occur first in the Permian.

Todd Bush is Principal at Energent Group where he focuses on oilfield strategy, commercial and market intelligence for leading oil and gas companies. Email Todd at todd.bush@energentgroup.com.