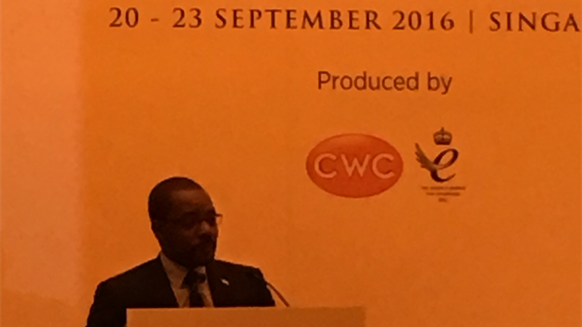 Equatorial Guinea's Minister of Mines and Hydrocarbons Gabriel Mbaga Obiang Lima calls on Asia Pacific companies to participate in the country's latest oil and gas licensing round (EG Ronda 2016) at an industry event in Singapore.

"I am here to invite you (in the Asia Pacific) to invest in my country (in EG Ronda 2016) ... (as) almost 80 percent of our petroleum resources come to Asia," Obiang Lima said.

The Minister told conference participants about the close business relationship between Equatorial Guinea and Asia, adding that China, Japan, South Korea and India are key importers of its oil and gas resources, which made up 90 percent of the West African country's exports and revenue.

The Equatorial Guinea delegation encourages regional oil and gas firms to submit letters of interest for EG Ronda 2016 -- which was launched June 6 and will close Nov. 30 -- in order to capitalize on the current low cost environment to acquire upstream licenses for exploration.

"Now is the best time to explore for oil and gas in Equatorial Guinea, when the cost of drilling a well is cheaper and when you have access to a wealth of advanced geological data," Obiang Lima said separately in a press release Wednesday. He added that the country's "legacy of exploration success and strong partnerships with international companies create a perfect environment for upstream investment."

The Ministry invites bids on all open acreage outside of blocks under direct negotiation - 17 licenses in total.