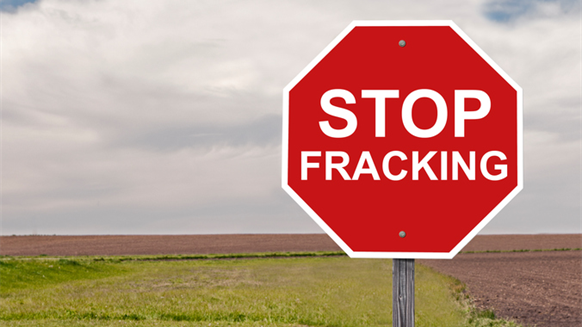 The state of Victoria plans to ban shale and coal seam gas fracking in what would be Australia's first permanent ban on unconventional gas drilling, citing the concerns of farmers and potential health and environment risks.

MELBOURNE, Aug 30 (Reuters) - The state of Victoria plans to ban shale and coal seam gas fracking in what would be Australia's first permanent ban on unconventional gas drilling, citing the concerns of farmers and potential health and environment risks.

However the government left the door open to allowing onshore conventional gas drilling after 2020.

The decision was made despite the fact that most of eastern Australia's gas supply is produced from coal seam gas and comes as a blow to manufacturers who have been clamouring for more gas supply to help keep prices down.

"Our farmers produce some of the world's cleanest and freshest food. We won't put that at risk with fracking," state Labor Premier Daniel Andrews said in a statement on Tuesday.

Farmers are worried that groundwater reserves could be depleted or contaminated by onshore gas drilling.

"Victorians have made it clear that they don't support fracking and that the health and environmental risks involved outweigh any potential benefits," Andrews said.

Gas supply has become an issue following the opening of three liquefied natural gas (LNG) export plants in the state of Queensland, which together are set to triple gas demand in eastern Australia by 2018 from 2014.

Andrews said Victoria, which gets most of its gas from offshore fields in the Bass Strait, would extend a moratorium on onshore conventional gas drilling until 2020, while it evaluates the risks and benefits of allowing it.

The state has banned fracking since 2012.

The Australian Petroleum Production and Exploration Association (APPEA) has said there is no environmental reason to ban onshore gas exploration and development.

Bert Stahr  |  August 31, 2016
Not only is this decision ignorant it is dangerous to Australia and especially to Victorians who rely heavily on gas. All of Australia is now high sovereign risk. An entire industry has been shut down. The losses will be both catastrophic and collossal as gas reliant industry collapses and household gas becomes an unafordable luxury. I believeThe NSW minister for energy warned his state about the lunacy of shutting down the gas industry nearly 2 years ago and didnt AGL say they wouldnt be able to supply enough gas to Sydney customers in this year? The asylum beckons.
John Morris  |  August 30, 2016
Idiots! Why are we all so badly lead with morons and idiots at all levels of Government in all countries world wide?