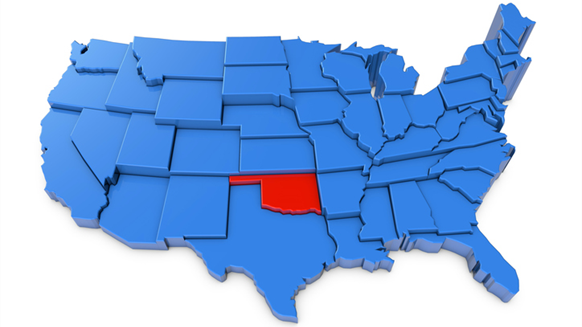 In June, Marathon Oil Corp. said it would acquire PayRock Energy Holdings LLC, a producer operating in the Anadarko Basin STACK play, for $888 million from venture capital firm EnCap Investments. Marathon’s acquisition of STACK assets – which Marathon President and CEO Lee Tillman called in a June 20 press release one of the best unconventional U.S. oil plays – is part of the company’s strategy for coping with low oil prices.

Devon Energy Corp. has also expanded its investment and activity in the STACK play; this includes its acquisition late last year of Anadarko Basin assets from Felix Energy LLC for $1.9 billion. Devon plans to deploy an additional $200 million in capital for its 2016 upstream program in the STACK and Delaware Basin, where it said it might add as many as seven operated rigs during the second half of 2016, the company said in an Aug. 3 press release.

Operators are still testing the limits of the STACK play, which was discovered by Newfield Exploration Co., said Jessica Van Slyke, research associate with Wood Mackenzie, to Rigzone. In the STACK, oil and gas companies are testing the oily potential of the Mississippian-aged Meramac moving west as well as the Osage and shallower, Pennsylvanian-aged Oswego northeast, Van Slyke said. This year, the play – the core of which exists where Kingfisher, Canadian and Blaine counties meet – has been among the most resilient in terms of rig count. Van Slyke attributed this resiliency to operators drilling to test new opportunities and to hold acreage by production. 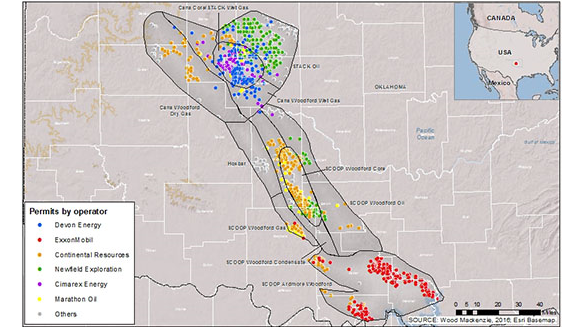 Marathon and Devon are two of the companies exploring the potential of Oklahoma’s STACK and SCOOP plays. Source: Wood Mackenzie

Operators are also drilling the Woodford, which stretches across large portions of Oklahoma, Erika Coombs, senior energy analyst with BTU Analytics, told Rigzone. Oil and gas companies have previously drilled the Woodford as more of a gas formation; today, they are looking at formations that produce more oil.

Both the Anadarko – home to the STACK play – and Delaware basins have been a key focus of exploration and production investors for the past 12 to 18 months, Evercore ISI analysts said in an Aug. 14 research note. Second quarter results saw a progression of positive results from the STACK, suggesting the play can compete for capital with the most prospective of Lower 48 plays, including the Delaware in the Permian Basin.

However, the STACK remains in delineation stage with wells testing not only the prospectivity of the play aerially, but also the ultimate number of wells per interval and zone. Evercore ISI analysts said they were awaiting the results from several downspacing tests, which they view as potential catalysts for acreage and company valuations, as they help determine the ultimate location potential as the play moves into full field development. These downspacing tests include Devon’s Alma spacing pilot, which is currently testing five wells per section with 1,050-foot horizontal spacing in the Meramac formation. In its Born Free staggered pilot, Devon is testing a combination of 400-foot horizontal and 170-foot vertical interlateral spacing.

Some refer to a stratigraphic column with 10 plus zones, Evercore ISI analysts said. But with the Meramec, it is generally agreed there are two zones (Upper and Lower), with some portion of the play being thick enough to support a third zone, the Middle Meramec. Most also agree that at least one Woodford well would be drilled per section.

Evercore ISI analysts also noted that the average wells per pad remains the lowest of any of these five plays at 2.29 versus an average of approximately 3.6 wells per pad overall. This dynamic is enhanced by Oklahoma’s interest pooling laws, which force participation of operators who either cannot be located, with whom negotiations are unsuccessful, or apply to small tracts which do not of themselves constitute a complete drilling unit, Evercore ISI analysts stated.

The Scoop on the SCOOP

The SCOOP, which is a little more developed than the STACK, was discovered by Continental Resources in 2012. In general, the geology of Oklahoma is a bit complex, but especially in the SCOOP. Due to this complexity, some wells were taking 100 days to drill. But breakeven costs have come down as operators have expanded their understanding of the play, Van Slyke told Rigzone. Van Slyke attributed operator excitement over the play to breakeven prices for SCOOP as low as $40/barrel. In the SCOOP play, operators are targeting the Woodford and Springer plays.

While the SCOOP is advertised as a tight oil play with estimated ultimate recovery (EUR) as much as 2 million barrels of oil equivalent, as much as 60 percent of SCOOP well production in the core can be natural gas. Companies operating in the STACK play also need to realize that not all STACK rock was created equal. While some wells in the core have break evens as low as $35/barrel, that’s certainly not the case for all areas of the play, Van Slyke stated.

Recent changes in Continental’s completion technique for its SCOOP Woodford acreage have boosted production by 35 to 40 percent, while increasing EURs by 15 percent to 2,000 thousand barrels of oil equivalent, according to an Aug. 16 analyst report by Wells Fargo Equity Research. The company currently has four rigs running in the basin targeting the condensate-window and starting completing an oil-window density pilot in July. Development so far has primarily been focused on Continental’s acreage within the condensate fairway, which Continental believes represents 40 percent of its total acreage position.

“Results from recent density testing support a mix of single and dual-zone development, with the driver being reservoir thickness,” Wells Fargo analysts noted. “In addition, should natural gas prices move meaningfully higher, this acreage position provides some natural gas optionality for the company and shareholders.”

Continental also has had success drilling in its SCOOP-Springer position, but higher break evens means that internal rates of return do not currently complete for capital within the portfolio. The company does not have any development plans for SCOOP Springer in the second half of this year, calling the acreage an “oil asset waiting for higher prices,” Well Fargo analysts noted.

BTU Analytics’ Coombs sees data quality as a challenge for the STACK and SCOOP plays. The fact that data quality as a whole in Oklahoma is poor and incomplete means that data available is even more gray than usual for that of an emerging play, said Coombs. From a market perspective, it’s harder to validate the results that producers are reporting.

A delay in reporting oil and gas production is not uncommon, said Alan M. Herbst, an advisor with Utilis Advisory Group LLC, in a statement to Rigzone. For example, the Ohio Division of Natural Resources requires that oil and gas production data be reported annually for each well by March 31 for the proceeding calendar year. To get a true picture regarding the number of permits issued, wells drilled, wells completed and producing wells along with volumes in Ohio, one must wait for the Ohio DNR to release the annual data in the second quarter of the following year, Herbst said.