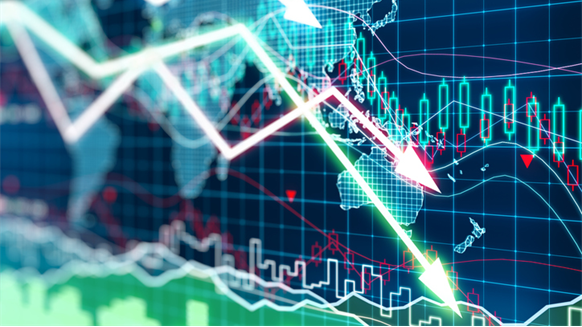 The worst may be yet to come for some strained oil services companies as $110 billion in debt, most of it junk rated, creeps closer to maturity.

(Bloomberg) -- The worst may be yet to come for some strained oil services companies as $110 billion in debt, most of it junk rated, creeps closer to maturity.

More than $21 billion of debt from oilfield services and drilling companies is estimated to be maturing in 2018, almost three times the total burden in 2017, according to a report from Moody’s Investors Service on Aug. 9. More than 70 percent of those high-yield bonds and term loans are rated Caa1 or lower, and more than 90 percent are rated below B1.

Speculative-grade debt is becoming increasingly risky, as the default rate is expected to reach 5.1 percent in November, according to a separate Moody’s report. The 12-month global default rate rose to 4.7 percent in July, up from its long-term average of 4.2 percent, Moody’s wrote. Of the 102 defaults this year, 49 have come from the oil and gas sector, Moody’s noted.

“While some companies will be able to delay refinancing until business conditions improve, for the lowest-rated entities, onerous interest payments and required capital expenditure will consume cash balances and challenge their ability to wait it out,” Morris Borenstein, an assistant vice president at Moody’s, said in the report.

The pressure on oilfield services companies will only increase through 2021, when nearly $29 billion of bonds and loans are expected to come due. Much of the maturing debt was issued between 2011 and 2015, when U.S. drilling was at a record high fueled by strong energy prices and new technologies. Moody’s expects that more than one-third of the analyzed companies will be carrying debt loads that are more than 10 times higher than earnings this year.

“Not surprisingly, these companies are most at risk for debt restructurings and defaults,” Borenstein wrote. “Refinancing needs across the sector are significant.”

Paul Koyich  |  August 09, 2016
Emma, good article on how not to invest in the Oil and Gas Industry, I guess it goes without saying that the Shale Gas and Oil Plays are really causing concerns in the Investors Market.....present and future.....