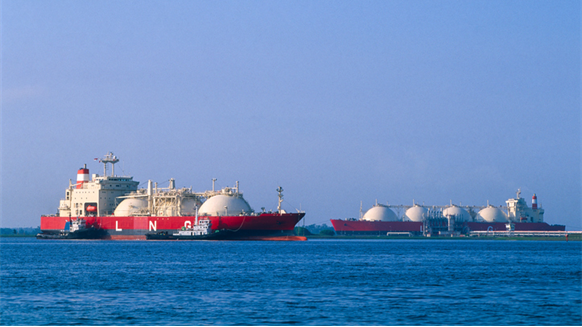 Shale drillers from Pennsylvania to Texas flooded the U.S. with so much natural gas over the past decade that prices slid to a 17-year low. Now they're going global, with the potential to upset markets from London to Tokyo.

(Bloomberg) -- Shale drillers from Pennsylvania to Texas flooded the U.S. with so much natural gas over the past decade that prices slid to a 17-year low. Now they’re going global, with the potential to upset markets from London to Tokyo.

The U.S. began shale gas exports by sea this year and is projected by the International Energy Agency to become the world’s third-largest liquefied natural gas supplier in five years. Gas will challenge coal at European power plants and become affordable in emerging markets, where prices have been high and supplies limited, according to the IEA and Goldman Sachs Group Inc.

LNG became the world’s second most traded commodity after oil last year and demand will keep growing, Goldman said. U.S. gas is adding to the global glut triggered by new Australian supply and weakening Asian consumption. Shale is having an outsized impact on how LNG is sold, prompting spot trading in lieu of long-term contracts.

"The U.S. clearly changed the picture," Costanza Jacazio, a senior gas analyst with the Paris-based IEA, said in a phone interview. "It’s going basically from zero to the third-largest LNG capacity holder in the space of five years and it brings a new flexible dimension to the LNG market."

With supplies growing, some Asian nations like Japan are contracted to buy more than they can consume, leaving surpluses to be sold. That’s lured major traders into the LNG market in recent years, including Vitol Group, Trafigura Group, Koch Industries Inc., Gunvor Group Ltd. and Noble Group, the IEA said.

The annual capacity of liquefaction plants, where gas is chilled and compressed for shipping, grew to 415 billion cubic meters in 2015 and will expand to 595 billion by 2021, according to the energy agency.

Cheniere Energy Inc. has sent 19 tankers of the liquefied gas abroad from its Sabine Pass terminal in Louisiana. By 2020, five terminals will be operating on the U.S. Gulf Coast and in Maryland. Global export capacity will surge 45 percent and the U.S.’s share will jump to 14 percent from nothing, according to Energy Aspects Ltd.

While U.S. supply is still relatively small, it’s having an impact because the American contracts are flexible. Australian and other foreign processors conclude long-term agreements to send gas to specific countries such as Japan and China. Asian buyers have contracted for more than half of the U.S. supply, but they have the freedom to ship the fuel to anywhere in the world, encouraging spot trading.

The change will weigh on already low global LNG prices. The WGI Northeast Asia spot LNG price has averaged just $5 per million British thermal units this year, a premium of $2.86 over benchmark U.S. prices. Two years ago, the gap was about $11. The premium for U.K. futures to the U.S. narrowed by about half to $2.

The widening of the Panama Canal is going to have an impact as well. It’s now able to handle most of the world’s LNG tankers and will reduce time and costs for U.S. cargoes to destinations such as Chile and Japan.

This week, Maran Gas Apollonia became the first LNG tanker to pass through the newly enlarged Panama Canal after picking up a cargo at Cheniere’s terminal in Louisiana. It’s carrying the shale gas to the Far East, according to an official at Maran Gas Maritime Inc. By 2021, the U.S. may dispatch as many as 550 tankers a year through the waterway, the U.S. Energy Information Administration forecasts.

Most of Cheniere’s cargoes so far have gone to South America buyers in Brazil, Argentina and Chile. Costs to ship to Chile will plunge with the canal expansion, the EIA said.

Shale gas created intense competition between coal and gas in the U.S., and now U.S. LNG may fuel European gas plants that are operating at about 20 percent of capacity on average, Christian LeLong, a New York-based analyst with Goldman, said in a phone interview.