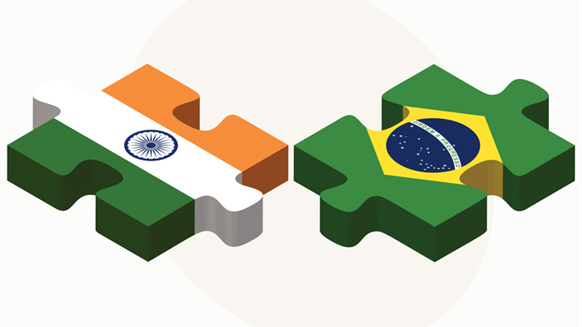 Petrobras warns its Indian partners in a huge offshore project to not expect oil from the site until 2022, according to sources.

RIO DE JANEIRO/NEW DELHI, July 4 (Reuters) - Petrobras has warned its Indian partners in a huge offshore project to not expect oil from the site until 2022, according to sources, a fresh sign of how low oil prices and the state-owned company's corruption scandal and mountain of debt are dragging on Brazil's energy industry.

The previously unreported, four-year delay in the "super-giant" discovery off the northeastern coast of the Brazilian state of Sergipe is forcing India's Oil and Natural Gas Corp and IBV Brasil Petroleo Ltd to seek ways to speed up the Petrobras-led project which has cost them $2.1 billion with no return in sight.

The delay and pressure from the Indian partners is just one of many challenges for new Petrobras Chief Executive Pedro Parente, named by Brazil's interim-President Michel Temer in late May amid an ongoing financial crisis.

In the face of a massive bribery and kickback scandal and Petrobras' $126 billion of debt, Parente has pledged to run the company in a more market-friendly way but has declined to comment on individual projects. He has also promised a revamped investment plan by the end of October - though it is unclear whether it will address the Sergipe offshore standoff.

In April, Petrobras told IBV, a 50-50 joint venture between state-owned Bharat Petroleum Corp and privately held Videocon Industries Inc, that there will be no oil output from Sergipe "until at least 2022," an IBV executive told Reuters. A year ago, Petrobras' promised first oil by 2018.

Hoping to speed up development, IBV told Reuters it has offered to arrange up to $10 billion in loans from Indian and other international development banks to finance the Sergipe development - Brazil's biggest oil prospect outside the prolific subsalt region near Rio de Janeiro where Brazil is pinning hopes of energy independence.

"It's a common and simple loan structure, if Petrobras is willing to provide future output as collateral, it won't have to pay a penny until oil starts flowing, something we could can probably do by 2020," the IBV executive said.

"But we get the feeling that Petrobras has yet to accept its new, more restricted circumstances," the executive added.

Petrobras told Reuters it has yet to receive a formal proposal from its Indian partners to finance the project. Asked about the delays, Petrobras said in a statement it has invested about $3.5 billion on exploration in the Sergipe blocks it owns with ONGC and IBV. It expects to complete a development plan for the areas by 2020 but has no date for the first production of oil.

All development decisions have been made in conjunction with its partners, Petrobras said, and delays have been the result of "considerable" deepwater technical challenges, efforts to reduce costs and a lack of infrastructure to transport the area's natural gas.

After investing $2.1 billion in the offshore finds since 2007, the Indian partners are getting impatient.

"We can't put off a return forever," the IBV executive, whose company has spent $1.6 billion in Sergipe, told Reuters. "We've been investing for nearly a decade. They now say we'll have to wait at least four years more. In our experience with Petrobras, it will probably be longer."

An ONGC executive, who also declined to be named, said the partners hope the new Parente regime will speed up development plans "so that we can monetize and unlock the potential at the earliest."

The company did recently relinquish its stake in one of two proposed production areas in the Sergipe block that it owns a quarter of to partner Petrobras.