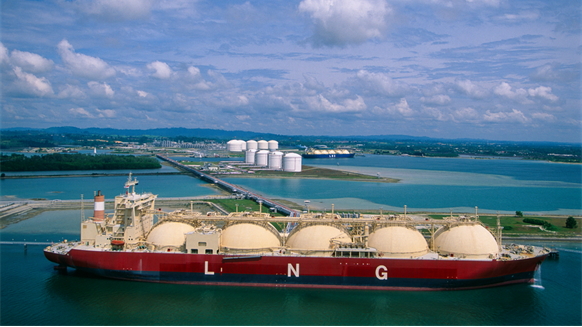 Energy giants such as Shell and Total are looking to build terminals and power plants in new markets to soak up the industry's rapidly burgeoning supply.

LONDON, June 12 (Reuters) - Energy giants such as Royal Dutch Shell and Total are looking to build terminals and power plants in new markets to soak up the industry's rapidly burgeoning supply.

Companies have invested billions in plants to produce liquefied natural gas (LNG) in places such as Australia and the United States.

But gas demand growth is slowing, prices are down and the LNG volumes companies are set to produce will exceed those even major buyers such as China and Japan can absorb.

That has turned attention to the downstream market and opportunities to create new markets from Ivory Coast to remote Indonesian islands by building gas-fired power plants, pipelines, regasification and storage terminals.

"We are ready to go downstream as much as it takes to unlock gas demand," said Laurent Vivier, president for the gas division at Total.

"We need to be present in downstream ourselves, to create demand and unlock bottlenecks along the chain including regasification, pipelines and power plants."

Total aims to triple the number of its gas and power markets and raise its annual LNG output to 20 million tonnes and its trading to 15 million tonnes by 2020.

Shell believes the number of markets buying LNG could double, according to its chief financial officer, Simon Henry.

"From around 20 to 30 ...we can see potential for around 50 different markets if you look out to 2030," Henry said. "Our aim is to capture the best share of those who are looking now to start or grow."

The focus on downstream mimics a model that companies such as Shell, Total, Exxon Mobil and Chevron have used for decades in the oil sector where their operations span oil wells, refineries and service stations.

But some analysts question how easily that model can be reproduced.

"Whether they succeed in this is another story, whether they have the mindset for this type of work is also another story," said Thierry Bros, senior gas analyst at French bank Societe Generale.

"It will be a painful test for these companies who are not that experienced in building small downstream demand," he said.